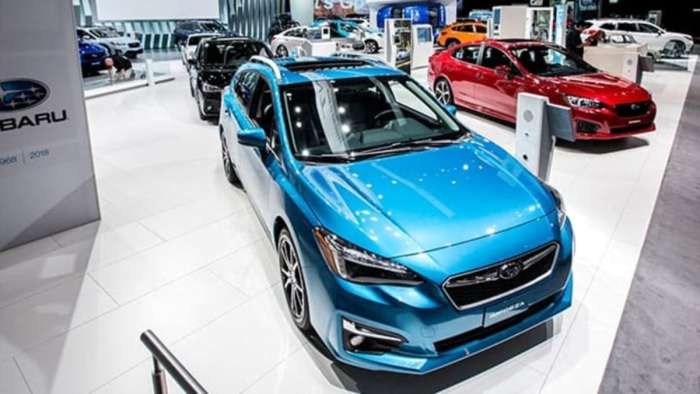 How Tiny Subaru Scores Best Reputation Among All Automakers

Subaru is a small automaker, but they show up big by scoring the highest ranking of any automaker when it comes to having the best reputation. How do they pull it off?
Advertisement

If you are a customer, you do business with people that have a good reputation and that have earned your trust. If not, you find a new product or service and you spend your hard-earned money somewhere else. Subaru seems to be doing something right, as the automaker has experienced eight consecutive years of sales increases, and doubled sales within five years. Their all-wheel-drive lineup with the all-new 2019 Subaru Forester and 2019 Crosstrek are setting new records by keeping customers happy.

Reputation Institute (RI), the world’s leading provider of intelligence, says Subaru has record sales because they have the best reputation among all automakers. RI announced the 2018 US Automotive RepTrak rankings and Subaru scored the highest ranking in the U.S. among all automakers. They are ahead of Honda, Toyota, BMW, and Nissan who are all in the top five. Tiny Subaru is number one in the world when it comes to having the best reputation with their customers.

According to Reputation Institute, Subaru, Honda, BMW Group and Toyota attained the highest rankings among automotive companies with each achieving a strong reputation score based on a survey capturing more than 1,785 individual ratings from among the informed general public in the US.

As the most reputable car manufacturer with the largest year-over-year increase in reputation, Subaru scored highest on the merits of products /services and performance, two of the most important dimensions for car companies to deliver on. Research shows ethical behavior and demonstration of values are among the biggest opportunities to increase reputation within the automotive industry.

How Subaru pulls it off

Subaru is pulling off what no other automaker has been able to accomplish. They stay connected to their loyal customers, they are attracting new buyers to the brand at an impressive clip and bringing out new products that are designed only for the U.S. market like the all-new 2019 Ascent 3-Row Crossover that’s built in the U.S. at their Lafayette, Indiana plant.

Subaru also pulls it off by connecting with their customers who have active lifestyles, they are concerned about the environment, they love dogs, and they even reach out to the LGBTQ+ community with events like Dining Out For Life. Subaru also connects with the causes many of their customers care about like the American Society for the Prevention of Cruelty to Animals, Make-A-Wish Foundation, Meals on Wheels and National Park Foundation.

Subaru understands their customer's values, and they have adjusted their marketing and the cars they build to reflect the things most important to them like safety. Subaru has an entire lineup of all-wheel-drive vehicles that every year score the highest safety ratings with the Insurance Institute for Highway Safety (IIHS). It’s another way Subaru understands what the American consumer wants. It also helps that cars like the all-new 2019 Forester SUV, and newly-redesigned 2019 Crosstrek small crossover have a ‘go-anywhere” attitude, are reliable, economical and fun-to-drive.