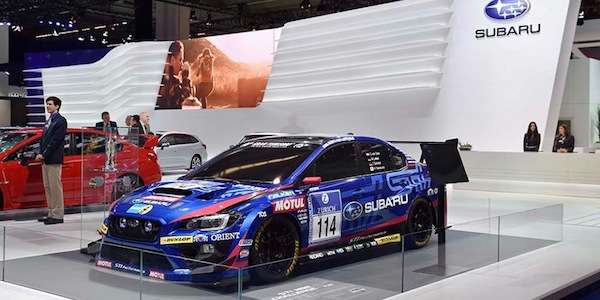 How Subaru uses a desire for challenge to entice global buyers

Subaru is at the Frankfurt Motor Show 2015 and brings the new 2016 Levorg sports tourer to the show. How do they entice Europeans to buy the wagon?
Advertisement

Germany is home to the Nurburgring 24-hour race and the 2015 Subaru WRX STI NBR race car that won the grueling race this year is on display at the Frankfurt Motor Show 2015. Subaru will use this to their advantage at the show as they show off the STI that brought them victory in impressive fashion in May.

Subaru Tecnica International, the motorsport division of Subaru, claimed its third Nurburgring-24 hour victory in its class last May. Its finish in 18th position overall was the highest the team has ever achieved, and 143 laps was the highest number the team has ever recorded. Making it even more impressive was that the 2015 STI maintained the lead in its class throughout the entire race and was never overtaken by a car in the same class.

The race-winning 2015 WRX STI sits on the Subaru stand at the Frankfurt Motor Show demonstrating the brands desire to challenge the toughest road race on the planet and win against the competition. It’s something that Subaru has been doing for decades on rally courses around the globe. It translates to production cars that ramp up the fun-to-drive meter.

The Levorg sports tourer is also on the Subaru stand and it’s the brands bell cow for new technology. The European spec Levorg GT will feature some of Subaru’s latest passive and active safety technology, including blind spot detection and rear vehicle alert. Subaru says the Levorg GT will “be one of the most refined Subaru’s yet.” The cabin will be fitted with the brand’s latest factory-fit infotainment system, bespoke sports seats and premium materials.

Levorg GT also comes powered by Subaru’s latest engine technology and features a 1.6-liter boxer engine that produces 125kW/250Nm. Subaru is bringing out this new engine first in the Levorg and possibly in other models in the future as they look to increase fuel mileage in their lineup.

Subaru is definitely trying to appeal to an active generation of Europeans. They will launch a new global campaign geared towards a generation wanting to experience the open air, go mountain climbing, trail biking, curiosity for the unknown, a desire to challenge, and proving they are alive. It’s what Subaru does with the new 2016 Outback, Crosstrek, Impreza, Forester, WRX/STI and Levorg multi-purpose all-wheel-drive vehicles.