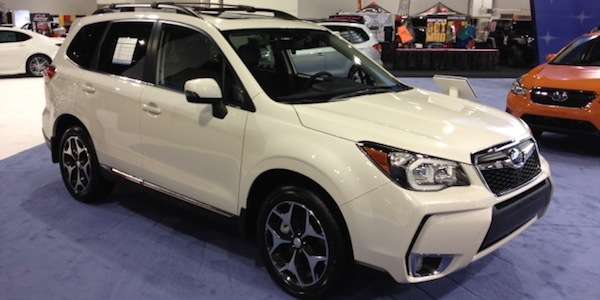 How Subaru dominates in the U.S. with Forester and Outback

Subaru is dominating the U.S. market in growth with strong sales of the 2015 Forester and Outback . How do they do it?
Advertisement

Fuji Heavy Industries (FHI), who makes Subaru automobiles, posted first quarter results for 2015 and is dominating with the 2015 Forester, 2015 Outback and XV Crosstrek all-wheel-drive vehicles. The small Japanese automaker doesn’t show any signs of slowing down as American buyers snatch up their recreation-purposed vehicles.

Where did Subaru begin?

Fuji Heavy started as defense contractor that built airplanes for the Japanese military during World War II and still has a small operation building military helicopters and aircraft parts today. They just received a large contract to build the wing for the Boeing’s new 777X airplane. But most of FHI’s revenue and income comes from its automaking division Subaru.

By global standards, Subaru is still tiny among the big players, and isn't even among the top 15 global automakers. But in the North American market, they are an “outsized” player where they sold 62.4 percent of Subaru's total global sales in the most recent quarter that ended March 31.

Subaru is on fire in the U.S.

In the U.S., Subaru has been on fire and dealers can’t get enough 2015 Foresters, 2015 Outbacks for consumers to buy. In a recent earnings briefing in Tokyo, Subaru’s top executive, Yasuyuki Yoshinaga joked that he would have to wear a helmet on an upcoming trip to the U.S. The reason: Dealers were going to hit him over the head for not supplying them with enough of his cars to sell.

It’s due to sales gains of 25 percent during the quarter, powered by massive gains for the new-generation Legacy sedan as well as market-beating year-over-year sales increases for its 2015 Outback wagon, Forester SUV, and XV Crosstrek crossover.

Less than a decade ago (2008), Subaru only had a 1.4 percent market share in the U.S. Through June 2015, Subaru now holds a 3.2 percent share of the North American market after more than a half-decade of steady increase. Subaru now outsells Mazda Motor Corp., Volkswagen AG’s VW brand and Germany’s luxury brands.