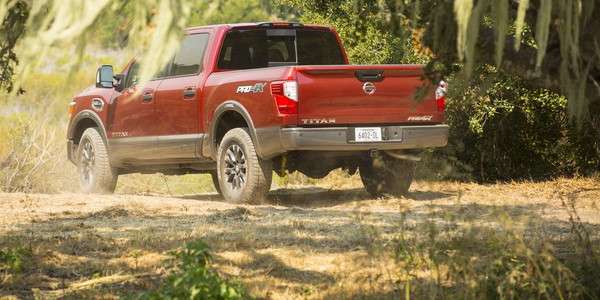 How Nissan Hit the Sweet Spot with the All-New Titan 5.6L V8, a V6 is Up Next

The 2017 Nissan Titan’s redesigned V8 could be a game-changer. How did Nissan hit the sweet spot?
Advertisement

When Nissan redesigned the V8 powerplant in the 2017 Titan pickup, they needed to get pickup buyers excited about the second-generation truck which drew lackluster response the first time around. It had to compete against longtime industry fixtures from Ford, GM and Ram. Nissan hit the sweet spot with the newly-revised 5.6-liter mill.

How does it compare to the outgoing engine?

The 5.6-liter V-8 in the previous generation Titan produced a miserly 317 hp and 385 lb.-ft of torque, with fuel economy of 13/18 city/highway mpg in 2-wheel-drive models. The 5.6-liter gasoline engine was totally revamped by Nissan engineers. Titan’s V-8 now produces 390 hp at 5,800 rpm and 394 lb.-ft. (534 Nm) of torque, making it one of the most powerful volume pickup engines on the market. The new mill delivers improved fuel mileage of 15/21 city/highway.

How does it compare with the competition?

Greg Schoenborn, manager of Titan marketability at Nissan North America Technical Center, told Wards Auto the goal from the beginning was to produce an engine with big enough power numbers, to satisfy the demands of a wider audience and draw attention to the new truck. It seems to be working as sales of the Titan are up.

Nissan engineers added gasoline direct injection that provides the majority of the power and fuel-economy gains. Schoenborn says, they did it by reducing knock, improving combustion stability and offering more precise injection control. They also raised the compression ratio to 11.2:1 from 9.8:1 from the previous generation engine. Nissan also added variable valve event and lift and multi-control valve technologies.

Nissan wanted to produce an engine with big enough power numbers, to satisfy the demands of a wider audience. Schoenborn tells Wards Auto, “We are trying to hit that sweet spot to cover all customers.” They did it by upgrading the previous-generation engine in a big way. Schoenborn went on to say, “It’s a much more advanced powertrain, although it shares the same displacement. Our targets were best-level acceleration, along with best-level fuel economy.”

What’s next for the full-size Titan pickup?

Nissan plans to add a V-6 engine to the 2017 Titan pickup lineup. That engine is intended to satisfy the needs of a large portion of its commercial business and also entry-level customers. Stay tuned.

Bubba wrote on September 26, 2016 - 6:41pm Permalink
A breakdown of all competitors' mpg ratings would be good here to compare...even last years figures.