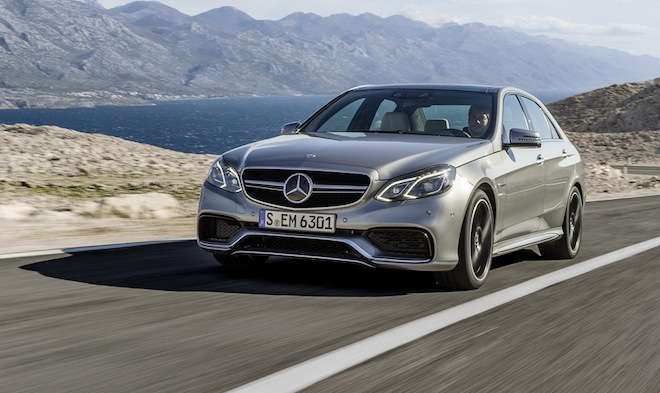 “S” may stand for sport and it’s absolutely special. Mercedes-AMG is introducing new “S” models with better performance and they will be coming to more AMG cars in the near future. A new 2014 E63 AMG S model has just been introduced with more horsepower and better performance than the already potent E63 AMG. It gets more hp and a new high-performance AMG 4MATIC all-wheel drive system. Why does Mercedes-AMG produce a new S variant? Because they can.

AMG is all about performance

AMG’s passion for performance isn’t anything new. They started building race cars over 45 years ago and the Affalterbach company is healthier than ever today. The S-Models are the next step in the evolution of performance and AMG remains the leader in producing performance vehicles. Mercedes says we can look forward to more of these AMG higher-performance S-Models in the future.

What does the new S-Model offer? With the introduction of the new 2014 E63 AMG S model, Mercedes-AMG offers its customers more power and improved handling, as well as a more extensive package of standard equipment. Performance enthusiasts won’t find a better high-performance sedan on the planet and the S model certainly changes performance rules.

The “S” is for special performance

Just how fast is the new E63 AMG S? It’s amazingly quick with a 0-60 mph sprint time of just 3.5 seconds. And because it comes equipped with the newly developed performance-oriented AMG 4MATIC all-wheel-drive system, it’s even more competitive and one of the top performance sedans in the world. On the new S-Model, the AMG 5.5-liter V8 biturbo engine gets an increase of 27 hp over the optional AMG Performance Package that was previously available.

Traction on the S is improved in wet or dry conditions and especially in the corners. Traction during acceleration with the new AMG 4MATIC minimizes wheel slip, and it has an electronically limited top speed of 186 mph. AMG increased performance results with newly adapted engine electronics and increased turbo boost pressure, from 0.9 to 1.0 bar in the AMG 5.5-liter V8 biturbo powerplant.

“S” gets special treatments inside and out

The E63 AMG S gets special red brake calipers and the AMG logo on the trunk lid that sports an "S" in contrasting black. Inside, the S is distinguished with contrasting gray stitching on the AMG sports seats, center door panels, door arm rests, steering wheel and center console. The S-Model front head restraints feature the AMG crest embossed directly into the premium leather. The AMG instrument cluster also reveals an "S AMG" logo on the speedometer and red accents on the dials. Illuminated AMG door sill panels with white backlighting complete the range of equipment and appointments exclusive to the S-Model.

The all-new 2014 Mercedes-Benz E63 AMG “S” is sportier and very special indeed. It will be available in Europe and U.S. buyers won’t be left out this time. Mercedes has not released pricing on the new performance E63 S model at time of this writing. The new S cranks up performance to another level for AMG, and there will be more coming in the future. Stay tuned to Torque News as more higher-performance S-Models are released from Affalterbach.