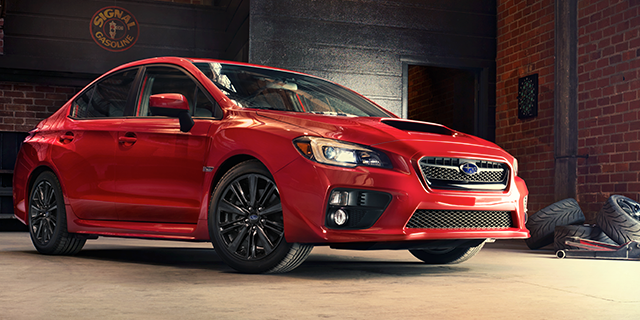 How does Synergy improve performance of 2015 Subaru WRX?

The 2015 Subaru WRX gets a number of new performance features for the new sports sedan. How does synergy help improve performance?
Advertisement

The all-new 2015 Subaru WRX is coming with a plethora of new performance features. How does synergy help improve performance? While WRX didn’t get a huge horsepower increase, there’s improved performance when you look at the sum of all the parts. Synergy is a wonderful thing, and Subaru knows how to add it all up to make the whole better. Here’s how they did it.

It starts with the all-new 2.0-liter DOHC, 16-valve 4-cylinder Boxer engine. Of course it’s still turbocharged with an intercooler and now comes with 268 horsepower and 258 lb.-ft. peak torque. The new WRX engine uses a combination of direct injection, high compression (10.6:1), Subaru Dual Active Valve Control System (D-AVCS), a twin-scroll turbocharger and an intercooler to get improved performance over the similar 2.0-liter turbo Forester engine. It also gets a broader torque curve and peaks at 258 lb.-ft. over a 2,000-5,200 rpm engine speed range.

While it looks like a step backward from the outgoing 2.5-liter mill, the new engine is smaller, lighter and more powerful. It produces more power, but a significant improvement comes in its weight reduction and engine placement. The new powerplant sits lower in the chassis for better weight distribution and will give the 2015 WRX better handling in the corners because of this. Many WRX buyers are going to take the car to the track, and this is where the changes will show up in a big way.

A huge improvement comes with the new powerplant being mated to a new six-speed manual gearbox. Of course one more gear is an obvious improvement. The 2015 WRX six-speed also provides a wider ratio spread than the previous five-speed. It also incorporates several performance and durability improvements for this high-performance application, including carbon synchronizers on first and second gears and a short-throw shifter for quicker shifts.

WRX also comes with a new, optional performance automatic transmission, the Sport Lineartronic CVT with two manual modes. While CVT and performance together sounds like an oxymoron, it’s being offered for two reasons. Subaru wants the WRX to appeal to a wider audience. True performance fans will buy the six-speed gearbox. First-time WRX buyers who want a gentleman’s sports sedan will choose the new Sport Lineartronic CVT. The new automatic will get better fuel mileage and will appeal to a different buyer altogether. It’s that simple.

But don’t be so quick to discount the new CVT. It may work better than anyone expected. The new automatic uses the CVT for better fuel efficiency but also benefits from a choice of stepped automatic shifting with eight pre-selected ratios. It can be manually shifted in Sport Sharp mode, and also six-speed and eight-speed manual shifting modes using steering wheel paddle shifters. From those I’ve talked to who have driven the new CVT, they say it’s surprisingly good.

Add the engine and tranny upgrades to the new suspension improvements, and WRX gets better handling and driving dynamics. WRX gets a 41% stiffer unibody which translates to a 20% reduction in body roll in the curves. The synergy is adding up.

Performance enthusiasts can take corners faster without losing grip because of its revised, high-performance suspension. The springs, dampers, crossmembers, subframe bushings, and front control-arm bushings and attachments are all stiffer. This creates a synergy that translates to better handling and driving dynamics under extreme driving conditions on the track.

Subaru also uses a new Active Torque Vectoring on the 2015 WRX that improves stability while allowing the WRX to be pushed harder. It also gets a much lower steering ratio of 14.5:1 that gives the steering a quicker response (you don't have to turn the steering wheel as much to get the wheels to turn a given distance).

The front brake discs on the new WRX are now 12.4 inches in diameter (up from 11.6 inches) that provide greater surface area and should improve fade resistance after a hard day of driving at the track. There is also a new master cylinder. It also gets a new Electronic Power Steering system.

Add the new 235/45 R17 94W Dunlop SP Sport Maxx RT tires to Subaru’s Symmetrical AWD, and the synergy makes for a markedly improved 2015 Subaru WRX. The sum of the parts add up to a performance car that should excite WRX fans and new buyers who have never purchased a WRX. With the new CVT automatic, it will appeal to a new WRX buyer looking for a sporty sedan who will never take it to the track. Come back tomorrow and we’ll look at every new feature and option on the 2015 WRX.