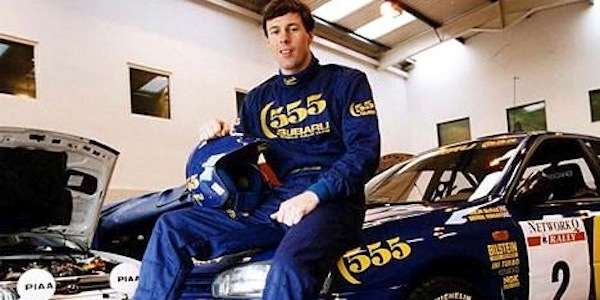 20 years ago, Subaru ran the successful Impreza 555 model in the WRC that was the forerunner of the 2015 Subaru WRX STI.
Advertisement

The 2015 Subaru WRX STI has rally-bred roots that go back to the Subaru Impreza 555 model road cars. Yesterday, August 5, was the birthday of one of the most famous drivers to ever get behind the wheel of a Subaru Rally car. His name is Colin McRae and he drove the Subaru Impreza 555 rally car that helped make the new-generation 2015 WRX STI performance car what it is today. The Subaru team won big with the Impreza 555 and Colin McRae had a great career driving for Subaru.

Colin McRae showed the world what a Subaru vehicle could do in the World Rally Championship. In 1995, Colin became the youngest world champion in the history of the WRC, driving the Subaru Impreza 555. Colin is widely recognized as the most distinguishable rally champion. In 1996 he was awarded the Order of the British Empire, and in 1998 received the title of the fastest drivers on the planet.

The Impreza 555 was a big hit with buyers

The phenomenal success of the Prodrive-built Impreza 555 in the world rally arena spawned a multitude of limited production models for the Japanese domestic market from Fuji Heavy Industries Ltd., maker of Subaru automobiles. They all had a strong rallying theme with the use of two unique colors, mirroring the WRC liveries of the day, and various rally-oriented upgrade parts to set them apart.

The Impreza 555 cars were popular around the globe and Subaru sold increasing numbers even after the Group A 555 had been superseded by the 2-door, wide body World Rally Car for the 1997 season. Other world markets also benefited from some limited edition models that were produced to celebrate the World Rally Championship successes by the Subaru team.

Today, we see the result of Subaru’s WRC involvement that spawned the Impreza WRX and WRX STI rally-bred cars. The new-generation 2015 Subaru WRX and WRX STI have deep rally roots and make the performance cars what they are today. Drivers like Colin McRae gave the Subaru brand credibility in the WRC and brought Subaru a World Rally Championship.

On September 15, 2007 Colin was tragically killed in a plane crash along with his five year old son Johnny and two family friends. Coin’s 1995 famous Impreza L555BAT is now on display in the Riverside Museum in Glasgow. The 2015 Subaru WRX STI’s rally-bred performance is a direct result of what Colin McRae showed the world what the Impreza 555 rally car could do.