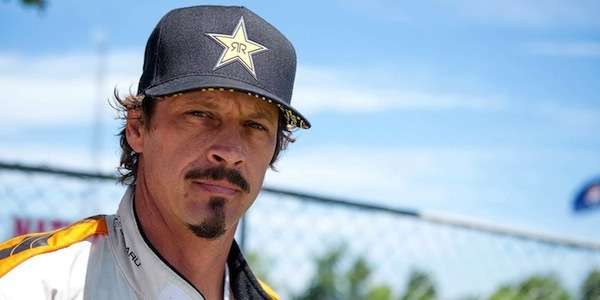 Bucky Lasek drives the 2015 Subaru WRX STI Global Rallycross car for Subaru Rally Team USA. Does he have what it takes to win?
Advertisement

On World of Adventure Sports on NBC, Bucky Lasek who drives for SRT USA says he has the talent to be at the top of the Red Bull Global Rally Cross. This season he is driving the #81 2015 Subaru WRX STI built by Vermont SportsCar who manages Subaru’s motorsport division here in the U.S.

Expectations are high this season with new 2015 STI race cars and drivers Bucky Lasek and Sverre Isachsen returning for their third season of Global Rally Cross with SRT USA. Red Bull GRC is half way through the grueling 12 rounds with round 5 and 6 just completed in Detroit.

SRT USA believes in Lasek and thinks he brings the talent he displayed as a professional skateboarder to the race track. Michael Zotos, engineer with Vermont SportsCar says, “Bucky is an exceptional talent and he brings professionalism from his other sport (skateboarding) to GRC. It’s not just about aggression on the track, it’s about aggressive finesse.”

Lasek says skateboarding is a lot like driving a race car and he draws from that sport. “You can take turns in GRC the way you can take tricks in skateboarding and learn it to get them dialed in.” Lasek started racing cars in the off season and on weekends as a “weekend warrior” when he wasn’t skateboarding. One day, his agent asked him if he wanted to go test with Subaru. Lasek took him up on the offer and now races full time with the SRT USA team.

STI GRC is all new

The 2015 STI is all-new for the 2015 Global Rallycross season and Lasek says the biggest change he sees is in the new chassis. The former skateboarder races along side teammate Sverre Isachsen who drives the #11 STI GRC race car. Both drivers have had little success at the halfway point in the season.

Lasek says, “I think gaining the fan base and gaining the respect of the other drivers just comes with seat time. Showing them that I’m not a kook out there wrecking cars and not out there because of my name. I want to let people know that I have the talent to be at the top, so let’s get it there!”

With six more Red Bull Global Rallycross races to go, Lasek and Isachsen who are driving the new 2015 Subaru WRX STI GRC cars for SRT USA are running out of time to “get it there” and reach the top spot which is currently held by Ken Block. Next up is GRC in Washington, D.C. August 15. Stay tuned.