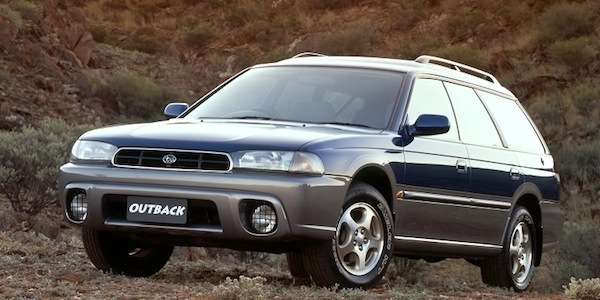 The new 2015 Subaru Outback has just passed 90,000 sales in Australia. Why is the Outback enjoying so much success?
Advertisement

Last month in Australia, the 2015 Subaru Outback had its best month ever down under. Now the multi-purpose all-wheel-drive wagon has passed the 90,000 cumulative sales mark in Australia. The Subaru Outback is named after the remote and usually uninhabited inland regions of Australia and Subaru’s Crocodile Dundee commercials in the 80s brought attention the rugged all-wheel-drive wagon.

Many regard the Outback as the original crossover when it was first launched in Australia in 1996. Now the fifth generation Outback offers a much-expanded range around the globe. Subaru AU reports the 2015 model set a new Outback record and says the new diesel automatic variants helped sales because of its broader appeal in rural and regional areas, where long-range dirt road driving puts it at a great advantage.

Subaru is having great success, especially in North America, the Japanese automakers biggest market, and Australia is the brands second largest global market. Subaru Australia boss, Nick Senior, said, “We have continually refined and improved the Outback range over 19 years, including making it our first mainstream model to have the six-cylinder version of our horizontally opposed Boxer engine, which was introduced in 2000.

Subaru’s new generation safety system called EyeSight is being recognized all over the globe for its superior abilities to help prevent accidents. Canstar Blue, an Australian and New Zealand researcher and expert ratings agency, has awarded EyeSight an innovation excellence award. EyeSight is offered on the new 2015 Subaru Outback and ...read more.

When it comes to technology that new car shoppers are most interested in having on their new cars, it’s not entertainment, connectivity, comfort or convenience that are the top priority. According to the J.D. Power 2015 U.S. Tech Choice Study released recently, three of the top five technologies consumers most prefer in their next vehicle are related to collision protection. This is where the 2015 Subaru Outback with EyeSight shines.

Senior went on to say, “Outback also shared the honor, with a Liberty (Legacy in the U.S.) variant, of being the first Subaru to offer the award-winning EyesSight driver assist system.” Outback also has the best-ever occupant safety rating for a Subaru, from the independent Australasian New Car Assessment Program (ANCAP). Its score of 35.99 out of a maximum possible 37 achieving a high five-star ranking.

In Australia, the 2015 Subaru Outback is enjoying much success because of its continual refinement of the first 1996 Outback that now includes new diesel variants, it’s recreational-purposed crossover body style, all-wheel drive capabilities and exceptional safety features.

Jacqueline Knox wrote on April 29, 2016 - 9:48pm Permalink
I have a Subaru Outback my third over the years. I have always preferred them for so many reasons. However this one has given me some major problems. I want to take my Outback 2000 to the Kimberley now, from Queensland back to WA to promote my book which I have written called 'Young in a wild Place' on my life in Outback Australia the Kimberley region. However I have no confidence in my Subaru now as I had the rear diff disconnected and it is now a 2x2 which doesn't bother me at all. But after having the same problem 3 times. I don't want to be stranded on the road again.

LG's New EV Battery Plant Is a Welcome News for Tesla
Tesla Giga Berlin's New Hurdle: It's Not Only the Gov't, but Now Tesla Itself
END_OF_DOCUMENT_TOKEN_TO_BE_REPLACED