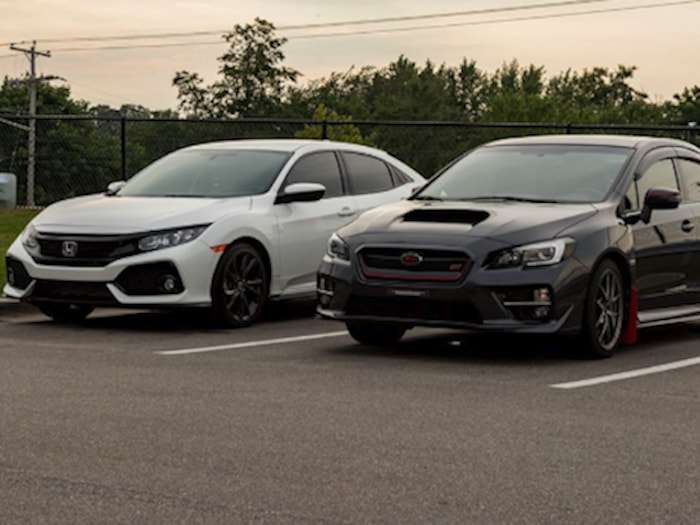 How does the 2018 Honda Civic Type R stack up against the 2018 Subaru WRX STI. Which compact performance car belongs in your garage?
Advertisement

There’s two things that stand out when you compare the 2018 Subaru WRX STI vs the 2018 Honda Civic Type R. The Civic is front wheel-drive vs the STI’s all-wheel-drive platform, and the Civic Type R offers a hatchback body style compare with the WRX STI sedan.

The advantages of the hatch body style are clear with the Civic offering more utility over the sedan body style. The hatch offers more versatility and utility when it comes to transporting sports gear and carrying the family dog along. Performance fans were disappointed Subaru dropped the 5-Door hatch in 2015, and they want it back. The Civic Type R offers the hatch as does the Ford Focus RS and Volkswagen Golf R.

Sales numbers say Americans want hatchbacks more than sedans. In 2017, compact and subcompact car sales were down 25 percent in the US. While hatchbacks in those same classes have risen 16 percent. While hatchbacks account for about a quarter of industry small car sales, Ford’s Fiesta and Focus out-perform that significantly at 33 percent and 40 percent respectively. Ford sales analyst Erich Merkle told USA TODAY, “Hatchbacks are the nugget of hope for the small car segment.” Advantage Civic Type R.

The Subaru WRX STI, sends engine output to all four wheels, while the Civic Type R retains the same front-wheel drive layout as do all models in the Civic lineup. It wouldn’t make much sense for Honda to change the Type R to all-wheel-drive, when the entire lineup rides on a different platform. “Civic traditionally has always been front-wheel drive and this platform is front-wheel drive,” said Civic senior product planner Rob Keough. “And Type R is about what’s the maximum that we can achieve out of that platform.”

Putting power down to all four wheels in a sport compact does have its advantages. Not only does it provide an added level of traction, but all-wheel drive helps send power where it’s needed and when it’s needed there. The system in the WRX STI, for example, provides for a performance-oriented 41:59 torque split. This allows the mechanically limited slip differential to have a quicker response and activates just prior to the electronic limited-slip differential. Manual mode offers six selectable settings, allowing the driver to vary the front-to-rear torque distribution to optimize all-wheel drive performance to suit specific driving conditions. Advantage Subaru WRX STI.

AWD does have disadvantages

The disadvantages with having an all-wheel-drive performance car, is the added weight. Adding the extra WRX STI AWD hardware does add weight (3,386 lb.), where the Civic Type R comes in considerably less at 3,117 lb. total curb weight. There’s also the inevitable drivetrain power loss resulting from powering all four wheels as opposed to just two.

“All-wheel drive would’ve added weight to the car, it would’ve changed the character of the car,” Keough said. “Honda’s racing philosophy has always been lightness and balanced performance, and the team felt like (it) could get the most performance out of this car without adding the weight and the cost of all-wheel drive.”

It worked for Honda because when they took the car to Germany to see how it would do on the Nurburgring, the Civic Type R completed its lap of the “Ring” in just 7:43.80. The Subaru WRX STI Type RA NBR did it in 6:57.5 last year, but that was a special “Record Attempt” machine that’s nothing like the production model. It also took the all-wheel-drive Focus RS and Golf R more than eight minutes to circle the Ring. Advantage Civic Type R.

When we compare engine output, the Civic Type R is powered by a 2.0-liter turbo four-cylinder under its hood that makes 306 horsepower and 295 lb-ft of torque. The Subaru WRX STI, meanwhile, makes 305 horsepower and 290 lb-ft of torque from its 2.5-liter turbo boxer engine, which is slightly less than the Honda. While there’s little difference in power, the Subaru STI boxer engine sits lower in the chassis and has a lower center of gravity than the Civic Type R. This makes make for a more dynamic driving experience, and gives the STI an advantage especially in the corners. Advantage WRX STI.

When we compare the 2018 Subaru WRX STI ($36,095 starting MSRP) vs the Honda Civic Type R ($34,100) each has advantages over the other compact performance car. What this comparison can't measure is the aesthetics, daily drivability, and something unmeasurable, called the grin factor. Maybe it comes from decades of Subaru’s motorsports involvement that transferred all that technology to the STI. It’s as close a competition as any, but at the end of the day the winner is clear.

Not many owners if any, will take either car to the Nurburgring for a track day. But all will drive their performance compacts in less than ideal conditions on the street. You’ll see many STI owners heading to the ski slopes with snowboards strapped to the top carrier on snowy winter mornings. We would choose the 2018 Subaru WRX STI for its daily ability to get you home safely in all-weather conditions and its recreation-purposed platform. Subaru’s Symmetrical AWD system is what puts the STI clearly ahead of the Honda Civic Type R.