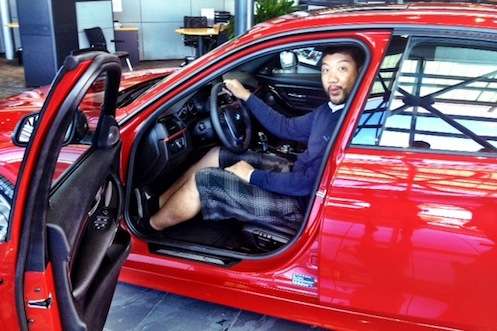 Earl Duque of Los Angeles, CA sits behind the wheel a 2012 BMW 3 Series sedan he won for creating the winning entry in BMW's "0 to Desir3 in 5.9 Seconds" contest.
Advertisement

The contest from BMW, asked participants to submit a video running just 5.9 seconds, which is reference to the time it takes the new 3-Series to go from 0-60. The BMW “0 to Desir3 in 5.9 Seconds” video contest asked contestants to show how much they “desire” the new BMW 3 Series sedan. Duque's video entitled "Test Drive Nostalgia," was chosen as the winner from more than 2000 entries.

Duque and a friend created the funny video by utilizing green screen technology, and then creatively integrated the two in the scene into a pre-existing BMW 3 Series spot. The short humorous video captures he and his friend sitting behind the wheel of a car thinking about what it would be like to test drive the 2012 BMW 3-Series sedan.

BMW had to watch more than 2,000 video clips before finally deciding on who the winner of the contest would be. The German automaker put together an impressive panel of judges including U.S. Olympic swimmer and eleven-time Olympic medalist Natalie Coughlin, world champion professional baseball player Mark Teixeira, and filmmaker Kurt Miller. The three judges then narrowed the field down to the 30 best entries based on creativity, innovation and uniqueness. The 30 finalists were open for public voting between March 27th through April 9th. Duque won going away with his winning entry of "Test Drive Nostalgia."

“It takes an amazing amount of creativity to put together a story and express one's self in less than 6 seconds," said Trudy Hardy, Manager, BMW Marketing Communications and Consumer Events. "Duque's passion and enthusiasm for our brand was clearly recognized by his peers who actively took to Facebook and YouTube to cast their votes in his favor.”

Earl Duque wins a new 2012 BMW 3-Series that has been completely redesigned and is better than ever. The new 3-Series is bigger, faster and more fuel-efficient than the previous generation car. The new 3-Series from BMW is more technologically advanced and the car is definitely fun to drive like the two friends portray in the short winning video.

The contest was created to draw attention to the launch of the all-new 2012 BMW 3 Series sedan, which made its debut at the North American International Auto Show in Detroit in January. Duque will now get to experience the excitement of driving his new 3-Series everyday. Click here to read about the all-new 2013 Audi A3 sedan that will be launching later this year.

Watch the winning "Test Drive Nostalgia" video and also the making-of video below.