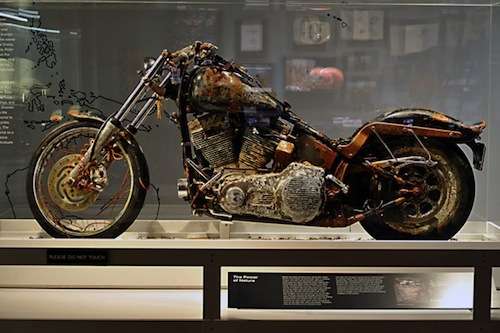 The motorcycle that was found off the coast of British Columbia has been memorialized in a new exhibit in the Harley Davidson museum to honor the Japanese tsunami victims.
Advertisement

On April 18, 2012, Canadian Peter Mark made a discovery that surprised the world. Over a year after the devastating tsunami hit Japan, he found a 2004 Harley-Davidson FXSTB Softail Night Train washed up on a remote beach on British Columbia’s Graham Island. The motorcycle was still in its container where its owner, Ikuo Yokoyama had stored it in Japan. His motorcycle had drifted in the Pacific Ocean for over a year after the Japanese tsunami took its toll on Northern Japan.

Harley-Davidson is displaying the famous motorcycle in its museum at the owners request as a memorial to those whose lives were lost or forever changed by the March 11, 2011 Japanese tsunami. The Harley-Davidson Museum has unveiled the 2004 Harley-Davidson FXSTB Softail Night Train in a special display and will be preserved in the condition it was found still bearing the Japanese license plate.

The motorcycle took a 4,000 mile trip and made international headlines in April. "This is unmistakably mine. It's miraculous," Yokoyama told Nippon TV when he was shown photos of the motorcycle. Yokoyama is still trying to recover from the devastating earthquake and tsunami where he lost three members of his family. Like many of the victims of the tsunami, he still lives in temporary housing in Miyagi Prefecture, Japan and is trying to rebuild his life in the aftermath of the disaster. Over a year later, many of the tsunami survivors are still struggling to put their lives back together.

Harley-Davidson contacted Yokoyama through news agencies and representatives from Deeley Harley-Davidson Canada and Harley-Davidson Japan in order to return his prized motorcycle to him. But Yokoyama declined the Milwaukee motorcycle makers offer and asked them to set up the memorial to honor the tsunami victims. Yokoyama was grateful and touched by the outpouring of support from Harley owners from around the world.

Harley-Davidson owners are a tight-knit group and what happens to one of their faithful riders is felt by all of them. There is a Harley-Davidson mystique that riders and even company executives have a hard time defining. Maybe that’s why this story has touched so many of the Harley faithful around the globe. The Harley mantra “It’s a journey, not a destination,” aptly fits the journey that Yokoyama and his motorcycle have taken. And the journey for Ikuo Yokoyama, his motorcycle and the tsunami victims isn't over yet.

The Harley Davidson journey is over 100 years in the making and this 2004 Harley-Davidson FXSTB Softail Night Train along with the its owner and many tsunami victims have an amazing story to tell. Bill Davidson, Vice President of the Harley-Davidson Museum said, “We’re truly humbled to display Mr. Yokoyama’s motorcycle. This motorcycle has an amazing story to tell, and we are honored to be able to share it.”

The victims of the Japan tsunami will be honored and remembered as the memorial is now available for public viewing. Ikuo Yokoyama’s Harley-Davidson motorcycle can be seen at the museum which is open year round and located at 400 West Canal Street in Milwaukee, WI. The museum is open daily from 10 a.m. - 6 p.m., with the exception of Thursday, when it is open until 8 p.m.