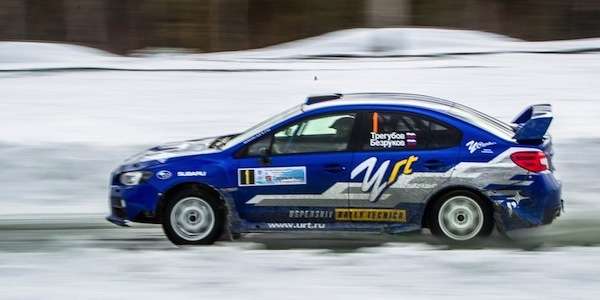 This past weekend, the 2015 Subaru WRX STI took first place after day one in the 3rd race of the Russian Rally Championship "Mountain Flax 2015". Day two, the STI encountered problems with the changing conditions in the later stages of the race. The race took place in the city of Asbestos, in the Sverdlovsk region of Russia. Gregory Tregubov, multiple rally champion piloted the STI along with Matthew Bezrukov doing the co-piloting.

This was Gregory’s first race in the 2015 WRX STI and had driven the previous model Subaru Impreza WRX STI. Gregory had noticed a big difference between the old STI and the new 2015 Subaru rally car’s driving dynamics. The stability and telemetry data from the last race driven by Sergey Uspensky confirmed the new nature of the STI.

CHECK OUT: Is mystery Subaru hatch the refreshed 2016 XV Crosstrek?

Rally "Mountain Flax 2015" was the last stage of the Russian Championship with snow cover, where more than 90 percent of the stages are packed snow and the rest ice. The total distance of seven rally stages is 141.10 km. Instead of snow and ice, the drivers faced mixtures of dirt and melting snow making driving extremely challenging. The 2015 STI finished first after day one, in spite of the conditions.

On the second day, the Uspensky Rally Tecnica (URT) team put studded snow tires on the front axle of the STI for better grip. Gregory had to change his pace with the new tires, but ran into problems as conditions changed from ice to gravel. In a left turn onto the highway, the WRX STI hit a barricade and was unable to finish the race.

Gregory was disappointed in the results, but said the car was performing perfectly before the accident. He said, “The new 2015 Subaru WRX STI is the best product FHI and STI have produced in the last 15 years. We can absolutely win with this machine.” Next up for the Uspensky Rally Tecnica (URT) team is the Rally Taman in the Krasnodar region May 28-31.