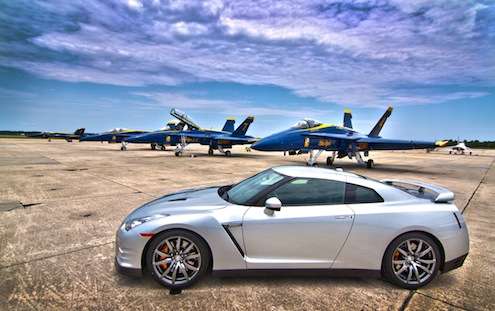 A team of Nissan designers paid a visit to an unlikely place to get inspiration for a future sports car.
Advertisement

When a carmaker thinks outside the box, you can expect some exceptionally good things to come out in their vehicles. That’s what Nissan is doing, and you have to give the Japanese automaker credit for doing something different. Nissan sent a team of designers to an unusual place to get ideas for their next sports car. The team took a trip to Pensacola Florida and paid a visit to the United States Navy Blue Angels Flight Demonstration Squadron training facility.

It seems that the design and product planners from Nissan were running just a bit low on inspiration. So they hopped on a plane and headed to a place where there should be plenty of inspiration for speed. They met with the Blue Angels pilots and ground crew to “explore ways of harnessing the command's speed and power for use in future automotive products.”

What better way to get inspiration for a fast new sports car than to observe some of the fastest machines on the planet. The Nissan team was able to ask Blue Angels pilots about how they interact with their gauges and instruments in different situations to gather insight for the development of future sports vehicles. They were also able to observe the pilots in action.

"We're always looking for inspiration beyond the auto industry in the design and development of our performance vehicles, and the Blue Angels have set the standard for high-speed excellence throughout their 66-year history. It was beneficial not only to study the designs of the 'Angels' F-18s up close but to get an understanding of how pilots and service personnel interact with their jets," said Jared Haslam, Senior Manager, Product Planning - Nissan Americas.

The Blue Angels team members were also given an opportunity to drive the high-performance Nissan GT-R. The Blue Angels pilots and ground crew were able to gave the Nissan team feedback on the exteriors, interiors and ride and handling of the Nissan vehicles they brought along.

The Nissan press release says that sending the team to the Navy air base was well worth the time and expense. The team returned very excited with a number of creative ideas and actionable items from both a design and product development standpoint. The end result will be the development of a future sports car that will incorporate these concepts and will end up in future vehicles.

As with most progressive automakers, they get their ideas, technology and inspiration from racing. The high-performance technology usually ends up being passed down to production cars. And it’s a good thing for consumers who like high-performance. Now Nissan plans to learn from the Blue Angels about fighter jet interface and about accomplishing fighter jet speeds. Look for some exciting new performance sports cars to come out of Nissan.