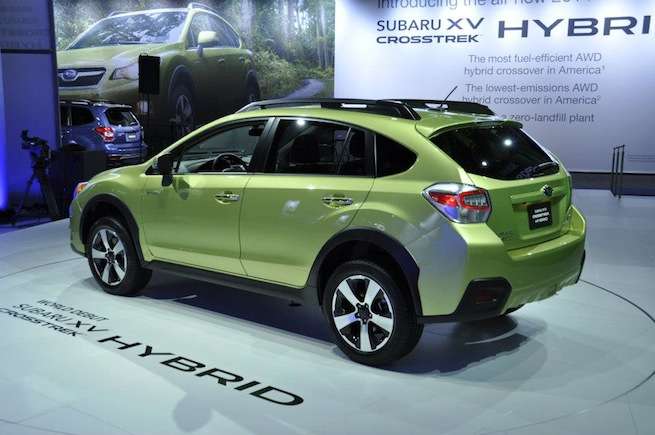 Five reasons why Subaru's first hybrid will be a resounding success

Subaru announced October sales of 2013 XV Crosstrek and it's selling well. It's a harbinger of the new 2014 Subaru XV Crosstrek Hybrid's success.
Advertisement

The new sporty XV Crosstrek crossover is a pioneer of sorts and is paving the way for major success for Subaru. Subaru of America just announced sales for October and the XV Crosstrek is selling very well. The Subaru XV Crosstrek is a vehicle that is appealing to a new younger buyer for Subaru and it’s a forerunner of the new 2014 XV Crosstrek Hybrid that is sure to be a success for the Japanese brand.

It will be Subaru’s first hybrid ever and it’s set to launch in December here in the U.S. Why will the new Subaru hybrid be a resounding success? Subaru is attracting new first-time buyers to the brand at an astounding rate. Bill Cyphers, senior vice president of sales, Subaru of America, Inc. said in the press release, “Almost 60 percent of our sales this year have been to customers new to the brand.”

Many of these new customers are millennials who are being drawn to the sporty new XV Crosstrek. It provides a small SUV with a “go anywhere” attitude that younger buyers are looking for. It features a higher ground clearance and Subaru’s all-wheel-drive that will take owners to their weekend getaways to the mountains or the beach.

We can see the results from the sales figures from the last two month’s. Subaru sold 3,536 Crosstrek units in September, compared to 192 from the same time last year. Last month, Subaru sold 4886 XV Crosstreks compared with 1735 for the same month a year ago. And when the new 2014 XV Crosstrek comes out later this year, this writer believes sales will explode.

Just look at the facts. The new XV Crosstrek hybrid will come with a low starting price of $25,995. It will feature a fuel-sipping hybrid electric drive system, coupled with a 2.0-liter Subaru Boxer engine that delivers 148 horsepower and 145 lb-ft of torque. And it will come with Subaru’s excellent symmetrical AWD. It will get an EPA estimated fuel economy of 25 mpg city/33 mpg highway.

Add in XV Crosstrek Hybrid’s 13.5-kW nickel-metal hydride battery pack for electric power, and the new hybrid crossover will be the lowest-emission, most fuel-efficient AWD hybrid crossover in America. The new hybrid will also be build in a zero-landfill plant in Indiana. That all makes for a great recipe for success.

Look for Subaru’s first-ever hybrid vehicle, the all-new 2014 Subaru XV Crosstrek, to be a resounding success when it’s launched here in the U.S. in December.