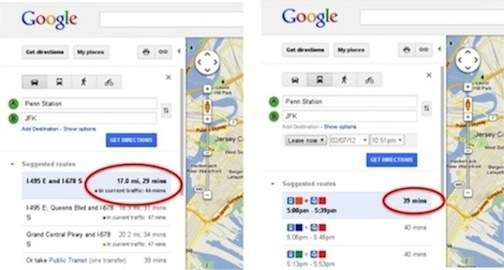 Google Maps has a new feature that uses both live and historic traffic data to help drivers estimate their travel time.
Advertisement

Google maps is making it easier to get to your destination by offering a new program that will tell you how long it will take based on current traffic conditions. Even though there are a number of navigation options since the arrival of smartphones, Google is offering something new to Maps: real-time-traffic.

Anyone who has to be at an appointment or get to the airport to catch a flight, will benefit from Google’s new feature. Google previously offered traffic data, however, this is the first time data has been available as part of directions. Mashable Tech reports the new feature introduced last week improves upon the old system of providing users with the worst case traffic scenario based on historic traffic data.

Google says the feature is constantly being refreshed to provide you with the most accurate, up-to-date estimate possible. “The old feature was removed because we wanted to improve the freshness of the data. The feature that we’re introducing on Google Maps works differently and serves a different purpose. The new time-in-traffic feature provides users with the ability to check current traffic conditions and estimates the length of travel time based on constantly refreshed data”, Google told Mashable. Drive times are displayed in line with the turn-by-turn directions, giving users the option of choosing between taking their car, public transportation or walking, depending on the conditions.

Google uses traffic data from traditional sources like cameras and news helicopters, but according to Google, data on current conditions is also collected from third-party services and from data provided by Google Maps Android users in the area who have opted in to the My Location feature offered on Google Maps. But the information may not be entirely accurate if Google gets its user-generated data entirely from those using an Android device, and they also have to opt in to the location sharing feature.

So with a limited number of users, the traffic data may not be entirely accurate until more people turn on the My Location feature on Google Maps for Android. But it’s still a big step forward in helping drivers save time by making travel plans based on real world traffic information. Hopefully it will prevent stress and road frustration.