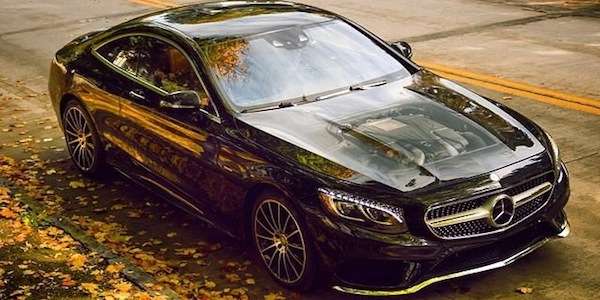 The growl of the new 2015 Mercedes S550 Coupe’s biturbo V8 provides a 449-horsepower soundtrack that will thrill any performance enthusiast. The new S-Class Coupe made its world premiere at the Geneva International Motor Show in March and it was a big hit. The new Mercedes S550 Coupe will make its way to U.S. shores this fall.

The two-door S550 Coupe is a beautiful example of what Mercedes offers performance customers here in the U.S. and around the globe. It will be be coming to the U.S. as a 4MATIC only with a 4.7-liter biturbo V8 powerplant. The S550 Coupe has an output of 449 hp and an impressive 516 lb-ft of torque. Mercedes says the sporty driving experience will be significantly enhanced by the emotional sound produced by a new exhaust system.

What adds to the driving experience of any performance car is the sound that comes from the exhaust. The deeper sound components of the new S550 4MATIC Coupe will ensure a fuller, sportier sound. In the transversally positioned rear silencer of the twin-pipe exhaust system, there are two flaps that can be opened and closed pneumatically depending on the engine speed.

Mercedes says when the flaps are open, the exhaust gases are conducted through the rear silencer along a different path so that the vehicle sound becomes more powerful. The switching point of the flaps depends upon the drive program selected. While in the S program, the flaps open earlier than when in the E program. As soon as the S-Class Coupe engine starts, the power of its sound can be heard.

Mercedes says the new S550 Coupe leans into bends much like a motorcyclist, thereby reducing the lateral acceleration acting on the vehicle's occupants. Weber says, “On country roads in particular, this means greater driving pleasure and ride comfort for our customers." This Active Curve Tilting feature will be a standard feature on the S65 AMG Coupe. Luxury performance buyers will get to experience the new S-Class Coupe soon.

The new 2015 Mercedes-Benz S550 Coupe will make its way to U.S. shores with an impressive growl coming from its unique exhaust system. Mercedes has not released pricing on the new S550 Coupe, but performance enthusiasts with a large budget can purchase the new exclusive high-end S550 Coupe at U.S. dealers beginning this fall.