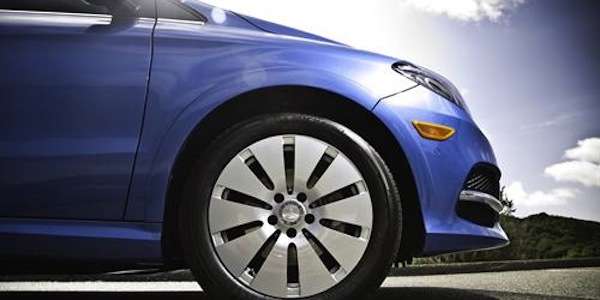 The all-new 2014 Mercedes-Benz B-Class Electric Drive is rolling off the assembly line and gets ready to launch.
Advertisement

Mercedes-Benz will begin offering the all-new 2014 B-Class Electric Drive here in the U.S. in June and it will feature electric mobility at a premium level. The B-Class Electric Drive will seat five adults and is based on the current generation B-Class that was launched in 2011 around the globe. This new electric B-Class has an electric system that was developed by Tesla in which Mercedes is using the Tesla drive system. Daimler owns a 4.3 percent stake in Tesla Motors, and there will be other projects with the Palo Alto, California-based automaker.

The new B-Class Electric Drive uses the Tesla electric motor generating 177 hp (132 kW) and develops maximum torque of 251 lb-ft (340 Newton meters). The electric B-Class is relatively quick and will launch from zero to 60 mph in 7.9 seconds, with an electronically limited top speed of 100 mph. Mercedes will use a “high-performance” lithium-ion battery that will be housed in the “Energy Space” under the four door vehicle.

Mercedes says the new B-Class electric will have a range of 85 miles (EPA). The B-Class Electric Drive can be charged from any standard domestic power socket. The initial estimates for a range of 60 miles, Mercedes says the charging time at 240V in the United States is less than 2 hours. The new Mercedes electric will regenerate electricity to the battery while driving using the brakes to convert kinetic energy into electric current. The charge socket is hidden behind the conventional fuel door on the side of the vehicle.

Inside, electric functions are displayed on the instrumentation of the B-Class Electric Drive on a power display in the right-hand circular instrument. The instrument pointer moves in a clockwise direction from the green zone towards the red zone, when full power is demanded by the driver. It drops back below the zero line when the vehicle is feeding energy into the battery through the recuperation feature.

The B-Class electric will have a unique feature in this segment and will be highly connected via technology. It uses a unique feature that will allow remote interaction and remote configuration of the vehicle.The driver can use their PC or smartphone to access the vehicle via the internet. It will be possible to determine the current state of charge of the lithium-ion battery or show the vehicle's current range on a map. In addition, the planned route can be displayed, showing at a glance where the vehicle can be recharged along the way. Another feature will allow the vehicle to be pre-heated or cooled by a timed device via this internet connection from a remote location.

Because of the current risk of fires, Mercedes says the battery is tucked away safely in the “Energy Space” under the B-Class which will keep the occupants safe in the event of a a crash. 2014 Mercedes-Benz B-Class Electric Drive will first be in U.S. showrooms starting this summer and then launch in Europe later this year. Mercedes will release pricing on the new B-Class electric closer to its dealer launch. Stay tuned to Torque News for the latest B-Class Electric Drive news.