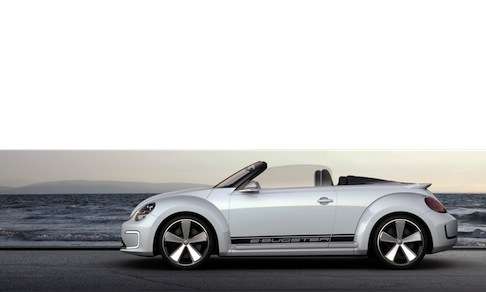 The electric Volkswagen E-Bugster Cabriolet will make its Asian debut at the Beijing Auto Show.
Advertisement

Just ahead of the Beijing Auto Show, Volkswagen has released the first images and details of new E-Bugster that will make its Asian debut. The concept car is an updated version of the model that was unveiled in Detroit earlier this year. But the car Volkswagen will be unveiling in Beijing will be a new Beetle Cabriolet open-top version of its electric-powered E-Bugster.

The new concept gets its name from the American nickname for the Beetle, 'Bug' and the 'speedster' body style may be a pre-production preview of the new Beetle Convertible that is expected to make its debut at the Los Angeles Auto Show in November. The newest E-Bugster still retains its bold concept styling, but the speedster-style roof gives way to a roof-less model that gives us a good idea of what the new Beetle Cabriolet will look like.

The images that were just released from Volkswagen, reveal a whole new look from the previous Beetle Cabriolet, whose roof remained exposed even when it was folded out of the way. But the car that will be officially unveiled in Beijing will have the roof structure completely stowed away beneath a stylish plastic tonneau cover. The new look gives the E-Bugster a cleaner overall appearance and preserves the sporty lines. The images reveal the tonneau cover extending all the way forward just behind the front seats, which turn the Cabriolet concept into a two-seater. The cover's rear edge extends over the back of the car forming a spoiler, giving the convertible the appearance of having greater length.

THe E-Bugster Cabrio will be powered by an electric motor that produces 114 horsepower enabling the two-seat Beetle speedster to accelerate from 0-60 in 10.8 seconds, and all with zero emissions. The lithium-ion battery is housed behind the front seats, has a range of 111 miles in the city and can be recharged using a conventional electric outlet in about 35 minutes. Driving range of the E-Bugster can be increased as the brakes are applied and the kinetic energy is converted into stored electricity.

Inside, the E-Bugster Cabrio comes with sport seats, and comes with its own light show as the driver pushes the start button. Volkswagen says, “first, the interior is immersed in a white light, then a blue light. It begins as a light pulse in the instrument cluster; from there the light emanates as a thin line of light, just one millimeter wide, coursing into the door window sills and around the air nozzles – a kind of visual awakening of the E-Bugster.”

The E-Buster Cabrio that will be unveiled in Beijing, will be the sportiest Beetle ever, and Volkswagen is attempting to show how sporty can also be green.

Tsingshan's Threat to Tesla: EV Maker Is In Battery Crosshairs
Tesla-Funded Research Reveals One of The Biggest Mysteries of EV Battery
END_OF_DOCUMENT_TOKEN_TO_BE_REPLACED