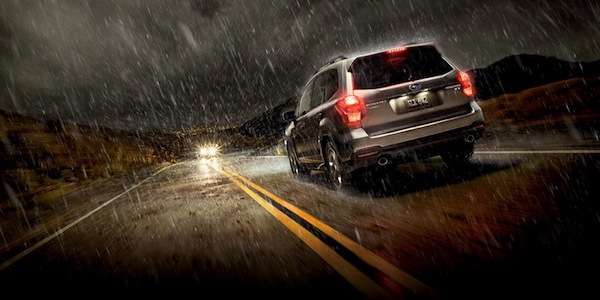 Are you buying a small SUV? Only a few offer good visibility at night. The 2016 Subaru Forester is rated one of the worst.
Advertisement

The 2016 Subaru Forester is a go-anywhere vehicle, just not the best if you drive at night. The Insurance Institute for Highway Safety (IIHS) tested headlights on 21 small SUVs, and not one earned the top rating of Good for headlight performance at night. Only four SUVs rated Acceptable and five Marginal. The Forester wasn’t even Marginal, the small SUV scored in the Poor category.

You would think that an automaker, who touts safety as being one of their core values, would put a good set of headlights on the top-selling vehicle in their lineup. Subaru offers their new High Beam Assist High Intensity Discharge (HID) headlights on the new Outback wagon which scored in the acceptable range. So Subaru does offer better headlamps than the Forester gets.

Subaru also introduced the new improved illumination HID headlights on the Subaru WRX and WRX STI in their South African models. They do make a difference in safety at night. IIHS says the Outback’s lamps and WRX/STI lamps provide improved illumination at night over the Multi-reflector halogen lamps currently on the Forester. The 2016 Subaru Forester gets the Poorly-rated headlights as standard on all trim levels.

Subaru is also offering High Beam Assist (HBA) on some of their models. 2016 WRX/STI models in SA get the HBA feature. HBA can automatically toggle between high and low beams depending on road conditions such as speed and oncoming traffic, enhancing visibility for you, and other drivers as well. LED Steering Responsive Headlights are available on the 2.5i Forester Limited models that move as the vehicle turns and illuminates a corner at night.

Go to Page 2: How did IIHS rate the other SUVs?

How was the study conducted? IIHS says they tested headlights at night on a test track. The lights were tested on straightaways as well as on left-hand and right-hand curves. Researchers tested how far the SUVs lights traveled, as well as whether oncoming vehicles experienced excessive glare.

How did IIHS rate the other SUVs?

Jeff Shaw wrote on July 16, 2016 - 3:50pm Permalink
I would hate to see folks buy a poorer rated "driving" SUV - especially in snow - just to get better headlights. I think IIHS is going a little too far now.
Peter Hugh wrote on June 17, 2020 - 12:51am Permalink
Exactly ! What a stupid article.
RSJ wrote on July 20, 2016 - 9:13pm Permalink
I think this is a bit much. I have a 2017 Subaru Forester Premium model 2.5i with the CVT. I don't notice any issues driving at night. This makes it look like its dangerous to buy/drive a Forester - just a bit too much hype.
WJ TILLY wrote on August 10, 2016 - 9:23pm Permalink
This is rubbish. You make it sound like it is dangerous. I am currently driving my 6th Subaru. Still the best SUV on the planet in every category. Crash tests, visibility, and handling in snow. This headlight thing is a non-issue.
Francis Fernando wrote on November 2, 2016 - 8:58pm Permalink
On my 2015 Subaru Legacy the Halogen Projector lights with Phillips Ultra vision +100% Bulbs is very good. I prefer it to my Mercedes 2008 C300 Factory HID Low Beams for night driving. These do not reach as far as the Subaru. However the Mercedes Bi-Xenons are unbeatable on the High beams. It is rarely that you get a chance to use the high beams as I do most of my night driving on the low beams.
Kirk Hartley wrote on January 19, 2017 - 6:51pm Permalink
This is totally overstated! I have a 2015 Forester and compared to my last suv the lights are one of the best features of the Forester. We love everything about our Forester. The headlights on dim or bright are more than adequate !
Jim jedlowski wrote on November 15, 2018 - 12:26pm Permalink
I have a 2016 Forrester I believe is low beams are very adequate also I get upset with the misadjusted high output lights that shine in your eyes and blind you the other one is some manufacturers produce lights with inferior materials and turn yellow and there is no usable light off of those cars why pay to Have headlights polished every six months that’s ridiculous Subarus you don’t have to polish they stay clear
S wrote on October 11, 2019 - 11:23pm Permalink
Visibility is really poor at night but especially in heavy rain or snow. While generally a safe car, not being able to see in conditions where visibility is already reduced due to poor lighting, is especially egregious
Denno wrote on October 19, 2019 - 9:40pm Permalink
Driving 2018 Outback and Libertys at work. They have the High Beam Assist. It is terrible. Driving in the country you have no control over when the high beam turns on or off, it turns off or adjusts the beam at the slightest reflection of signs or cats eyes and can take some time to come back to high. It is REALLY painful and leaves you without high beam constantly while it adjusts itself almost constantly. Absolutely awful feature.
Larry Hart wrote on December 5, 2019 - 1:52am Permalink
After reading this article, I can only think that the Writer was referring Only to Subaru's "standard" configuration of the 2016 Forester. There is also (and I have it) an XT Touring version with Eyesight. The low beams on this particular version are upgraded to HID - and with the upgrade also comes an upgraded fog light which uses H11 halogen and is Steering Responsive. So, to me, this article is misleading - and actually 'incorrect'.
Great Dane wrote on September 10, 2020 - 6:25pm Permalink
i put led's in and its beautiful at night in fact so nice i get compliments by people hi beaming me all the time