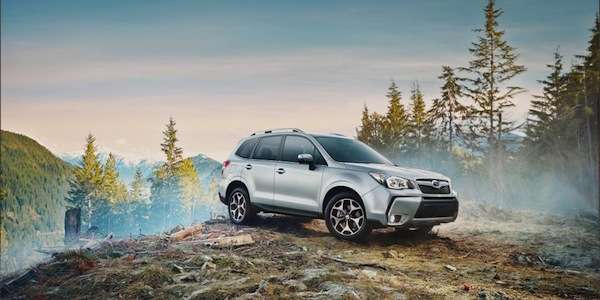 Do you want a new Forester with a 6-speed manual? Get your passport updated

Subaru Canada has announced pricing for the 2016 Forester SUV and buyers can still get a 6-speed manual. U.S. consumers can only look and not touch.
Advertisement

The 2016 Subaru Forester is making its dealer launch now and it still comes with a 6-speed manual gearbox. This is an option that U.S. buyers won’t get. Subaru did away with the manual gearbox when they brought out the new generation Forester in 2014. Subaru Canada still offers the manual option on two models. U.S. consumers can only look and not touch.

The 2016 Subaru Forester is available with the choice of two Subaru Boxer engines; a 2.5-liter naturally aspirated 4-cylinder or a 2.0-liter direct-injection twin-scroll turbocharged 4-cylinder on the Forester XT.

The new Forester offers the choice of a 6-speed manual or Lineartronic continuously variable transmission (CVT) in Canada. Each version works differently with specific versions of Subaru’s symmetrical full-time All-Wheel Drive system geared toward that application.

On models equipped with the CVT, X-Mode with Hill Descent Control brings added capability with the push of a button, offering extra control for slippery off-road situations. This system can also tackle the steepest of inclines with confidence and control for any driver in the family. The 6-speed manual gearbox does not come with the X-Mode feature.

Bevan Lewis wrote on October 12, 2016 - 10:27am Permalink
Hello, Forester Diesel - Manual vs CVT Why doesn't the Manual have x-mode? What advantages or disadvantages do you see? Does manual provide the same level of control as the CVT with x-mode ? Thank you.
Elie wrote on October 27, 2016 - 9:45am Permalink
With a manual gearbox you are x-mode, it depends on your skill. And hill descent control is pointless on a manual because you can just downshift
Nyree L. Roberts wrote on May 15, 2017 - 11:52am Permalink
I NEED a 2017 Subaru Outback or Forester in a manual transmission please! Can our dealers order them from Canada for us to finance? Some one please help!

Toyota's First EV Will Have a Name of BZ: Toyota BZ
First Videos From Inside The Boring Company's Las Vegas Loop
END_OF_DOCUMENT_TOKEN_TO_BE_REPLACED