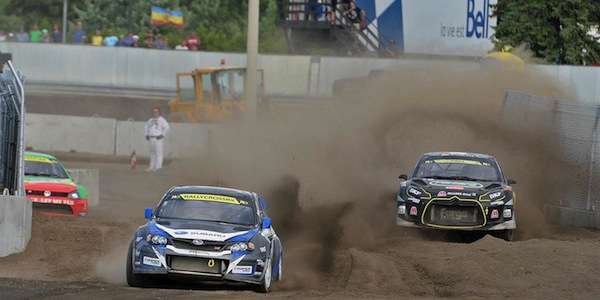 Did Subaru use World RX of Canada to prep for return to WRC in the 2015 WRX STI?

Subaru entered the STI GRC car in World RX of Canada. Is Subaru eyeing a return to WRC in the 2015 WRX STI?
Advertisement

This was more than just Round 7 of the World Rallycross Championship. This was about seeing if Subaru is ready to make a return to WRC in the 2015 WRX STI. We reported yesterday that Subaru is preparing to make a new commitment to motorsport and possibly WRC. This was the perfect opportunity to see if the new STI platform is ready when it was so close to home for Vermont SportsCar. Their shop is located just a few hours drive from Quebec’s Trois-Rivieres Circuit where the World RX of Canada was held this weekend. What did this race tell Subaru?

The officials poured over the new 2014 WRX STI entry from Subaru as they had not seen this car before now. The SRT USA team worked diligently with World RX officials throughout Thursday morning as they laid eyes on the 2014 WRX STI for the first time. The STI needed to be modified from its current GRC state to comply with the supermini-friendly regulations currently present in the WRC. The SRT USA team made the necessary mods and it passed the WRC officials tight scrutiny.

The Subaru Team chose Sverre Isachsen to be the driver who would make the first return to WRX for Subaru since they pulled out in 2008. Isachsen was the logical choice as he is no stranger to FIA European Rallycross and won the series three years in a row (2009-2011) before joining Subaru Rally Team USA in 2012. The return to the World Rallycross stage was deemed a success for the team as Isachsen won two of four heat races in his 2014 Subaru WRX STI and advanced to the semi-final round where he finished 5th.

A surprise for STI team

But this was more about seeing how the STI platform could compete against the top cars and teams in the world. It was a fantastic opportunity for Subaru to test their metal in WRC when it was so close to home and they could compete in their own backyard. The aggressive jumps at Quebec’s Trois-Rivieres Circuit proved difficult and on two occasions Isachsen bent his steering linkage on the STI and required repair before being able to continue. This surprised the SRT USA team as the GRC series features countless huge jumps and it’s never been an issue. The Subaru STI techs were able to make the needed repairs quickly to get the car back on the track for the qualifying rounds.

It was like old home week as Isachsen was thrilled to be back racing against his old rivals. He held in there and had good launches off the line with the 2014 WRX STI. He won heat races 2 and 3 and placed 4th in heat race 4. In the semi-final Isachsen was third on the approach into the second turn, but was forced to brake hard to avoid a collision. He dropped two spots and he maintained 5th position for the remainder of the race.

Subaru could be eyeing return to WRC

Subaru pulled out of WRC in 2008 because the business environment had rapidly deteriorated forcing them to withdraw. Even though they had won three manufacture’s titles and three driver’s championship titles, they wanted to protect their brand image. Ikuo Mori, president of Fuji Heavy Industries Ltd. cited the global economic slump and falling car sales as major reasons for the exit. But that has all changed now and Subaru has seen record sales for five straight years with a six in 2014 a strong possibility. The economic climate has changed and it looks like Subaru is ready to launch a new motorsport program.

This opportunity at World RX of Canada gave the Subaru WRX STI GRC team a good opportunity to see how they compete against the top cars and WRC teams in the world. Will Subaru be making a return to World Rally Championship in the 2015 Subaru WRX STI next season?

Other 2015 Subaru WRX STI stories of interest.
Will Subaru return to WRC with a startling new 2015 WRX STI?