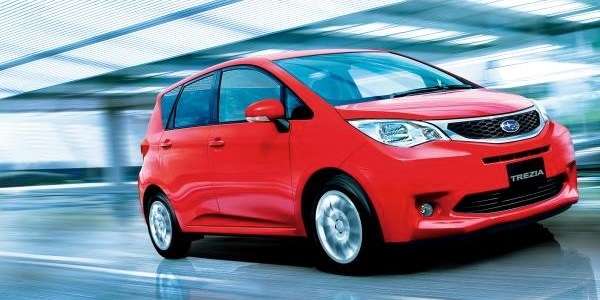 Could the redesigned 2014 Trezia be Subaru’s new electric vehicle?

Subaru is releasing an improved Trezia in Japan. Could this be the platform for Subaru’s electric vehicle?
Advertisement

Subaru has just made improvements to the 2014 Trezia compact car and it will be released in Japan on May 30, 2014. We know from their recent management vision “Prominence 2020” that the Japanese automaker is launching new vehicles in the next six years. Fuji Heavy Industries Ltd., (FHI) maker of Subaru automobiles said they will “Aim for top-level environmental performance in both areas of internal combustion engines and vehicle electrification.” What does this mean for the U.S. market?

North America is Subaru’s number one market around the globe and they will be developing a new plug-in hybrid SUV for the U.S. and Canada. FHI is also working on an electric vehicle and will do this in partnership with Toyota, who owns a 16.48 percent stake in FHI (Subaru). The two could collaborate on a new all-electric vehicle that would make it to U.S. shores before 2020. Subaru will need to meet U.S. zero-emissions regulations taking effect in 2018.

Subaru could use the refreshed 2014 Trezia that is sold in Japan to be the platform for an all-electric vehicle. Just like Mercedes-Benz used the B-Class platform to launch their B-Class Electric Drive, it saves production costs to use an existing car instead of developing a new vehicle.

The new Subaru Trezia already is the perfect compact car to adapt an all-electric power system. Currently it uses a 1.3-liter 4-cylinder engine and adopts an Atkinson cycle system. Subaru says the compact car has newly developed fuel efficiency improvement of 11 percent. They also improved the performance with the adoption of the newly developed exhaust manifold and optimization of valve timing.

And true to Subaru’s core values, the 2014 Trezia comes in all-wheel-drive and also a 2WD version. It comes mated to a new CVT automatic transmission for improved fuel-efficiency. It also comes standard with an idle stop system in the 2WD versions. It uses a new Super UV cut + IR front windshield that reduces the indoor temperatures and increases the air conditioning efficiency in the summer.

Outside, we see the new front grille with the honeycomb mesh grille design and Hexagon that is a unifying motif for the Subaru brand. Could this be the platform for a new Subaru all-electric vehicle? It looks like Subaru is already developing the technology along with Toyota Motor Co. The newly refreshed 2014 Subaru Trezia could be the prefect platform with which to launch the new Subaru EV.

Other Subaru Prominence 2020 stories of interest.
Subaru to roll out plug-in hybrid, seven seat SUV and new efficient engines by 2020

Moss wrote on May 23, 2014 - 2:35pm Permalink
Dear North End Subaru and Bob Waite,I wanted to take a monmet and thank you for the great experience I had at your dealership recently and working with Bob Waite. While pre-ordering my new Crosstrek my Subaru impreza needed an oil change and Rick was able to get my vehicle right into service. The process of pre-ordering my new vehicle with Bob Waite was a stress free experience. Bob made sure the vehicle was set up with all the right features and options I desired. I had a great time working with Bob! He knows what he is talking about and made the time spent well worth it. I can't wait for my new vehicle to come in and to do future business with your dealership!Thank you!