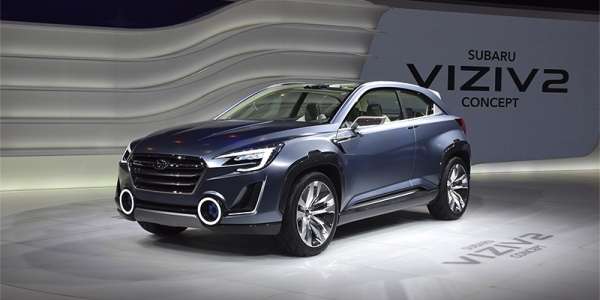 Subaru has a new vision that will upgrade their whole product lineup. What is coming?
Advertisement

Subaru has rolled out their “Prominence 2020” vision and it will include a new plug-in hybrid and seven seat SUV. Subaru will also overhaul its existing boxer engine lineup by 2020. This information comes from Automotive News who received the news from Yasuyuki Yoshinaga, president of Subaru maker Fuji Heavy Industries as the new plan was rolled out last week.

Here’s what we know Subaru will do in the next six years. In the report, Automotive News says, Subaru will expand capacity in North America, add a plug-in hybrid and a new seven-seat SUV here in the U.S. and they will also overhaul its powertrain lineup. Subaru will now have the ability at their Indiana plant to increase capacity after ending the production of the Toyota Camry. This will free up space to produce these two new SUVs.

Yoshinaga said the reason for new “Prominence 2020” vision for Subaru, is because the Japanese automaker is growing faster than expected, and they accomplished their “Motion-V” goals two years ahead of schedule. Subaru’s successes in unit sales increase through US-oriented product development, commitment to safety including its highly-rated collision safety and "EyeSight" driving assist system, cost reduction efforts, low-incentive sales, and continuous efforts on highly efficient production all contributed to exceeding their goals.

Subaru will now further strengthen the brand with new products and keeping an eye on quality. Yoshinaga said, "We want to be a company that may not be big in size but has distinctive character and high-quality products. We will enhance the Subaru brand."

How will they do this? Automotive News says Subaru will introduce a plug-in hybrid for Subaru’s largest market, the U.S., to meet U.S. zero-emissions regulations taking effect in 2018. The new plug-in hybrid SUV will be based on Toyota's hybrid technology. Toyota owns 16.48 percent of Fuji Heavy Industries Ltd. (FHI).

The report says Subaru will be upgrading all their Boxer engines to include direct injection starting in 2016. Subaru will be rolling out this next-generation boxer engine in the next few years. Subaru will also overhaul its powertrain technology, adding cylinder deactivation and lean combustion cycles by 2020, in order to meet more stringent emissions standards. Yoshinaga said Subaru wants engines “with thermal efficiency rates above 40 percent, which would top that of the engine in the Toyota Prius hybrid.”

There are lots of new things coming from Subaru in the next six years. Look for a new plug-in hybrid, a new seven-seat SUV and new more-efficient boxer engines coming to the Forester SUV, XV Crosstrek crossover and Outback wagon.