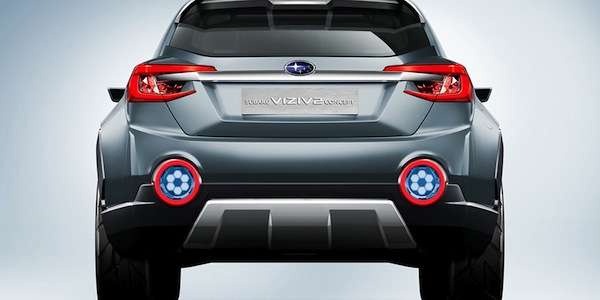 Could this be Subaru’s next hybrid SUV?

The Subaru VIZIV 2 Concept made its North American debut at the Montreal International Auto Show 2015. Could this be Subaru’s new hybrid SUV?
Advertisement

Subaru says the VIZIV 2 Concept is a future-generation crossover concept that represents the direction of Subaru's brand value. Subaru brought the new concept crossover to the Montreal International Auto Show 2015 where it made its North American debut.

"VIZIV" is a coined word inspired by the phrase "Vision for Innovation" and it expresses Subaru's vision of the future direction of the brand. Subaru has carved out a unique niche that they will continue to fill with their sporty “go-anywhere” all-wheel-drive vehicles. They will need to bring more hybrids to the market and the VIZIV 2 Concept points to the future of the brand.

The VIZIV 2 Concept employs a sporty 4-door body style that combines utility and multi-purpose use that is typical of Subaru. Subaru says the crossover will allow four adults to ride comfortably on longer trips for recreational excursions.

VIZIV 2‘s hybrid system employs the same 1.6-liter turbocharged direct injection engine which is used in the new Levorg sports tourer that launched last year. That engine develops an impressive 125kW (168 hp) and 250Nm (184 lb. ft torque). When coupled with the electric motors, this SUV should be powerful and quick. It’s mated to a high-torque-compatible Lineartronic (CVT).

VIZIV 2’s hybrid system uses one front motor and two rear motors to provide the electric power. The battery will likely be installed under the rear cargo area and it will still maintain Subaru's unique Symmetrical AWD (All-Wheel Drive) layout.

The new hybrid will be all-weather/off-road capable

Because of Subaru’s horizontally-opposed boxer engine that sits low in the chassis, the new crossover will employ a higher ground clearance and still have a low center of gravity. Subaru has developed a new "Independent-rear-motor-driven symmetrical AWD" future generation system which will enable the hybrid to go on some serious off-road adventures.

The Subaru VIZIV 2 Concept made its North American debut at the Montreal International Auto Show 2015. This is likely a forerunner of Subaru’s new hybrid crossover. Stay tuned.

Parks McCants wrote on January 19, 2015 - 2:59pm Permalink
This is an exciting time in the evolution of automotive propulsion. Cool stuff! I look for Honda to come out with a comparable system for HR-V.(soon)Chunky!