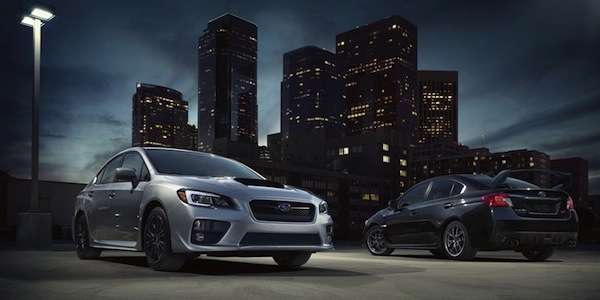 The 2015 Subaru WRX and WRX STI were launched less than a year ago and immediately set new records around the globe. What’s in store for 2015?
Advertisement

The 2015 Subaru WRX/STI performance sedans were launched 11 months ago in North America and were immediately embraced by performance fans in the U.S. and Canada. Last year in the U.S. market, 2015 WRX/STI achieved 25,492 units, and increase of 41.9 percent over the previous year. In Canada, the WRX series posted sales of 2,642 units an increase of 42.1 percent. In Australia, the WRX/STI also contributed to their strong sales. The WRX series, propelled by the all-new version which launched in April, achieved 3,554 units an increase of 91.6 percent from the outgoing model.

Like Subaru always does in their forecasts, they are projecting a modest increase of just 5 percent over 2014 sales numbers in the U.S. for their entire lineup. The WRX/STI series saw the biggest percentage increase in the lineup over the outgoing model in 2014. They will likely continue to see very strong sales for 2015, but demand for the performance sedans will slow as buyers on waiting lists finally take delivery. Some buyers have waited as long as 6 months to get their cars. If Subaru brings back the WRX/STI hatchback, orders for the 5-door will reach a fever pitch again.

The new-generation Subaru WRX/STI received significant upgrades and performance enthusiasts responded in a big way. The new fourth-generation rally-bred sports car offers a good dose of healthy performance at a great price (WRX $26,295) excluding destination. The firmer chassis and STI-retuned suspension makes WRX/STI a more precise-handling and better performing car than the outgoing model. The 2015 Subaru WRX/STI delivers on its rally heritage and stays true to its core values of exceptional handling and agility. Look for it to remain a top seller for Subaru in 2015.

Austin F. wrote on January 18, 2015 - 2:33am Permalink
the sti/wrx is even more popular now since the evo is no longer being made, if you want a AWD 4 cylinder turbo, for this price, you gotta go with the subie.