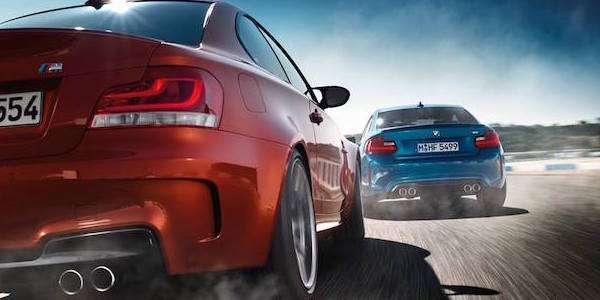 BMW M2 vs BMW M235i which sports car belongs in your garage?

The new 2016 BMW M2 is about to makes its global debut. The M235i is already in BMW showrooms. Should you wait for the M2?
Advertisement

The M235i has an M in its name and M means motorsport that translates to driving performance for enthusiasts. The BMW M2 is about to make its dealer launch in the first quarter of 2016 and it’s a true M model. The new M2 will dial the excitement level up a few notches. Which car should be sitting in your driveway?

We’ve driven the 2016 M235i and thought it was the best small performance coupe for the money. No one has driven the M2 Coupe yet unless you work for BMW M GmbH. From early indications, the M2 will be one of the best performance cars to come out of BMW M of all time. Should you wait until next spring when they hit BMW showrooms, or is the M235i a viable option for performance enthusiasts?

What’s under the hood? The M2 is powered by a TwinPower Turbo 3.0-liter 6-cylinder inline engine that pumps out an impressive 365hp and 343 lb-ft of torque. The M2 gets it’s internals from the M3/M4. The M235i’s 3.0-liter inline six-cylinder engine gets 320 and 369 pounds-feet of torque. The M235i is available with an optional eight-speed automatic, in the M2 it’s replaced by a seven speed dual clutch transmission.

Of course we need to point out that the BMW M235i is not a true M model but it is impressive as a straight factory coupe from the Bavarian automaker. The M2 is lighter by 55 pounds over the M235i, which is impressive considering it packs 45 more horses and comes with extra high-tech gadgetry inside. The M2 is quicker from 0-60 mph with the automatic transmission, with which it clocks in at 4.2 seconds compared to the M235i’s 4.3. When both are equipped with a 6-speed manual gearbox, the M2 is even quicker by half-a-second compared to the M235i.

The chassis of the M2 is similar to the M235i but the M2 gets some serious upgrades that sets it apart. It features light-weight suspension parts to reduce unsprung mass and gets high-performance brakes that were tested on the Nurburgring. The M2 is a serious track-ready M model. The M235i is highly capable in the corners for driving enthusiasts.

BMW M has really cranked up their creative juices with the M2 styling. Hussein Alattar with BMW Design was responsible for the exterior design of the M2 Coupe. The M2 will never be mistaken for the standard M235i. Everything is different from the 2 Series. It’s wider by 60 millimeters in the rear and 100 millimeters in the front. It also gets a large air intake with its outer air inlets, winglets on the side and larger wheel arches to accommodate the larger wheels. The M2 gets double duel exhaust tail pipes that are moved inward to emphasize the width of the car. When they sit side by side, the M2 is a formidable looking machine compared to the milder M235i.

What's the difference in price?

Should you wait for the M2?

The BMW M235i has already been recognized as one of the best cars for 2016 by the experts. The M235i is one of the best vehicles in the BMW lineup because it embodies everything that made BMW a driver-focused machine.The M2 kicks everything up a few notches. No one other than BMW M has driven the performance coupe yet, but you can count on it getting rave reviews when it finally gets tested.

We have driven the M235i which has an ideal 50-50 weight distribution and we found the BMW M235i dials up driver engagement and it gets better in the corners. For the driving enthusiast, it’s available now and the M235i is a good choice. For the performance enthusiast, the 2016 BMW M2 will be an over the top experience that would be worth waiting for. The new M2 will make it’s global debut next month at NAIAS. Stay tuned.