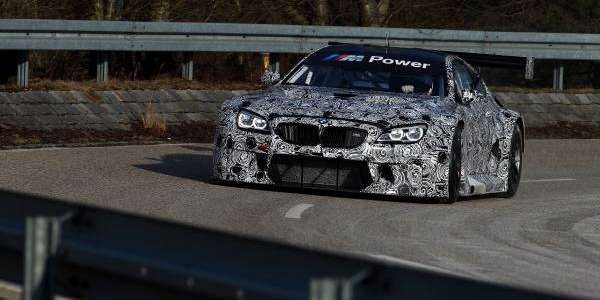 BMW rolls out the new M6 GT3 at the BMW factory test track in Dingolfing.
Advertisement

BMW has released the first image and details of the new M6 GT3 that took to the track at the BMW test track. BMW teams will compete in national and international series, as well as at iconic endurance races, from 2016 onwards with the new M6 GT3 race car. BMW says development of the M6 GT3 is progressing according to plan.

The M6 racer left the garage for the first time with Jorg Muller piloting the camouflaged car. BMW Motorsport Director Jens Marquardt said, “This car incorporates all the experience we have gained in recent years on the endurance and GT racing circuits. We are well on schedule with the development, and are confident we will be able to take to the track in 2016 with a package that is competitive from the outset.

M6 GT3 is powered by a 4.4-liter V8 M TwinPower Turbo production engine, which has been modified for use on the racetrack. It produces 500 horsepower and uses dry sump lubrication. The car is lightweight and weighs in at less than 1,300 kilograms. Other features of the BMW M6 GT3 include the transaxle drive concept, a six-speed sequential racing transmission, and motorsport electronics. The chassis’ aerodynamic properties were optimized in the BMW wind tunnel.

BMW engineers took the M6 platform and turned it into the ideal racer. To ensure the safety of the drivers, BMW Motorsport developed and produced the FIA-approved safety cell, which complies with the very latest safety standards. The engineers also placed great emphasis on efficiency, ease of maintenance and reliability, which is crucial at the 24-hour endurance races.

Muller was happy with the initial outing in Dingolfing and commented on the first run, “A roll-out is obviously just an initial performance test but, on the whole, everything was very good and we had no problems. The engine really impressed me. It is powerful and has good torque, which is important for a car like this. I am confident that BMW Motorsport will provide its customers with a fantastic racing car, in the BMW M6 GT3.”

BMW Motorsport has worked to hone the BMW M6 GT3 for use in motor racing. It also will provide valuable information for future production cars. The new M6 GT3 is available for purchase and anyone interested can send an email to [email protected] and be the first to receive any new info on the car.

LG's New EV Battery Plant Is a Welcome News for Tesla
Tesla Giga Berlin's New Hurdle: It's Not Only the Gov't, but Now Tesla Itself
END_OF_DOCUMENT_TOKEN_TO_BE_REPLACED