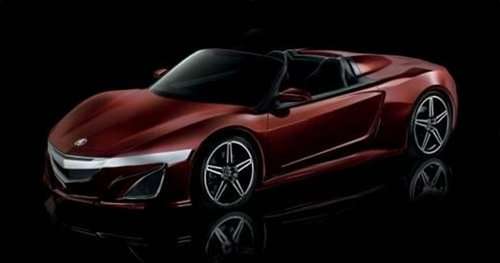 The guys over at Inside Line got to test drive The Avengers Acura NSX Roadster that stars in the movie.
Advertisement

When we reported last week that Acura is the automotive sponsor for Marvel Studio's upcoming movie The Avengers, and created a one-off convertible version of its 2015 NSX sports car for the upcoming movie, we were correct. But when we told you the NSX Roadster shares much in common with the NSX hybrid coupe concept that was first revealed at the Detroit motor show, we have to make a revision to the story.

When Acura released an image of the new roadster from the movie identifying it only as "an Acura convertible sports car", they were being completely honest. And the car is a special one-off Acura NSX Roadster created specifically for Tony Stark to replace his Audi R8. But the boys over at Inside Line got to test drive The Avengers movie car and were a bit surprised at what lies underneath the beautiful roadster body.

When the car was delivered to them in the Mojave Desert in a plain white unmarked semi, they were excited to get to drive the one-of-a-kind car. As the car was rolled down the ramp, they had to stop and stare at what they describe as a “gorgeous, devastatingly, truly gorgeous car.”

But as the walk up to the car and open the door, what they see is an interior that takes them back to 1990, because what’s under the skin of the beautiful exterior, is really a 1991 Acura NSX. And since the interior of the car didn’t get any screen time, the cabin of the roadster was left untouched. It even had some Iron Man red paint on the center console and a hunk of electrical tape where the top center vents should be.

Honda asked the Trans FX prototype shop in Oxnard, California to build the car that was inspired by the NSX Concept car. That's where the resin and fiberglass body was formed, equipped with custom-fabricated LED taillights and covered in the same shade of red as Iron Man's suit. "We knew it would have to be reliable for filming and we couldn't come up with anything that would be more reliable than an original NSX," explains Dave Marek, division director for Auto Design at Honda.

When Inside Line checks out the interior further, the odometer reveals that the car has 252,000 miles on the clock. Rick Bordanaro, the vice president of business development at Trans FX told Inside Line, "We just needed one that was straight and complete for the project. I'm pretty sure we paid something like $18,000 or $20,000 for it. They removed the original body and crafted the beautiful Avengers Acura NSX Roadster body on the 1991 chassis.

As they start up the Roadster to take it for a test drive, Acura asks that they keep their driving speed to under 20 mph. Since Acura's PR guy is standing right there they oblige. Inside Line says that up to 20 mph, The Avengers Acura NSX Roadster feels just like a 1991 Acura NSX with a quarter million miles on it.

Check out the test drive videos of the Acura NSX Roadster below.