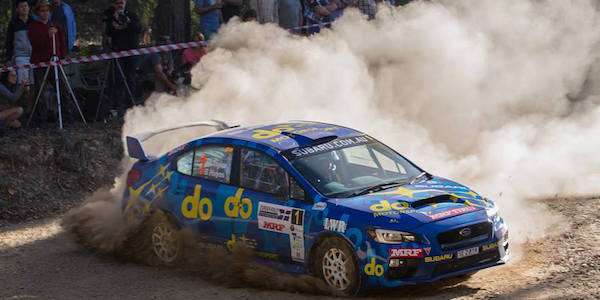 It was tough first round for Subaru do Motorsport’s new production 2017 WRX STI rally car. The team switched to a Production Rally Car (PRC) class for the 2017 season, and the first rally stages proved difficult. Molly Taylor and Bill Hayes are Subaru do Motorsport’s team drivers again this season, but they are competing in a production WRX STI rally car instead of the All-Wheel Drive Group N production class NR4 in which they won the championship last year.

As they returned to the rally stages in a new WRX STI, day one proved difficult for the team as they experienced extreme dust and had differential problems that set them behind right from the start. The problem appeared on SS4, when the front differential vibration indicated a possible gearbox issue. The pair stopped momentarily on the stage to check the car, and dropped to 14th and fifth overall.

The Les Walkden Rallying tech crew completed a challenging gearbox swap in 24 minutes to get the duo ready for the remaining five afternoon stages. Taylor and Hayes had top five finishes over the balance of the day’s stages moving them up to seventh overall. Molly said, “This is a new rally, in a new car and the dust has certainly played a big part, but we’ll literally dust ourselves off and will be back tomorrow.”

Dust was a big factor again on day two, and Taylor and Hayes found themselves struggling to see in the brown fog. Molly said, “It cost us a few seconds when we overshot some junctions on the first couple of stages because of the dust. There was one turn where we overshot by about 40 meters, then we had to wait for the dust to settle before we could go back.”

The duo pushed the STI hard on SS13 Enfield 1 and the 14.77 kilometer SS14 Ross Creek 1, the day’s longest stage, and got second place in both stages. The new Subaru WRX STI was consistent over the final four stages, with a third place, two fourth places and a fifth place to finish the day.

Even with the dust and gearbox issues, the team’s Production Rally Car class 2017 Subaru WRX STI achieved a fourth place overall and 48.9 seconds behind the leader in the first round Eureka Rally. Next up is the Make Smoking History Forest Rally, WA, April 21-23.