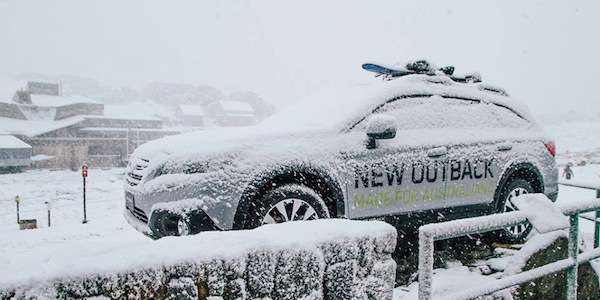 Subaru Australia is experiencing incredible sales of the new 2015 Subaru Outback. A Subaru exec in Australia pleads with FHI for more to sell.
Advertisement

The new 2015 Subaru Outback is popular all over the globe but in Australia the SUV-alternative is up an incredible 576 percent over the previous June. Australia is Subaru’s next largest global market after the U.S. and Outback is a big reason why.

Subaru Australia Managing Director, Nick Senior is flying to Japan to plead with Fuji Heavy Industry (FHI) maker of Subaru vehicles to plead for more Outbacks. Senior says, “The reaction to our new Outback has been nothing short of phenomenal and it has created a substantial back order so I am off to Japan next week to plead for more stock. But given the worldwide demand for new Outback and new Liberty I think there will be a pretty big queue at the production office!”

Subaru is attracting new buyers to the brand

Aussie buyers like what Subaru has done to the redesigned 2015 Subaru Outback and are responding in a big way. Many of the sales are coming from new buyers to the brand. Senior went on to say, “While former Subaru owners make up a solid percentage of new Outback and Liberty buyers the most pleasing aspect of the first six months of this year has been the amount of new customers we are attracting to the brand.”

The Subaru Forester and XV are also up in sales in Australia and set another all-time record down under for SUV sales. Subaru Australia reports overall they sold 4502 vehicles in June, 270 vehicles higher than the November 2013 result that had been the previous all-time best. The result has catapulted Australia to be Subaru’s second largest international market outside Japan behind Subaru of America.

The new generation Outback is a big reason why as Subaru succeeded in producing the best ever off-road Outback, and it started in Australia where the conditions can be severe. The Outback wagon is synonymous with the vast, remote, and arid outback regions in Australia, and the name is intended to emphasize the off-road capability of the vehicle. It’s winter in Australia and it’s another reason the all-wheel-drive Outback had record sales in June.

Nick Senior is going to Japan and he hopes the trip will be fruitful in producing more 2015 Subaru Outback inventory for the Australian market. Senior says, “I am sure given Subaru’s strong support of the Australian market and the loyal following of our customers we might be able to squeeze a few more vehicles for this market.”