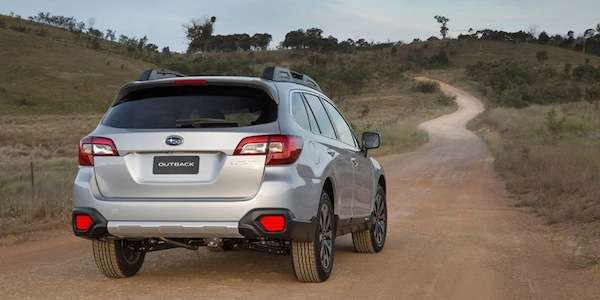 2015 Subaru Outback DNA helps it soar Down Under

The all-new 2015 Subaru Outback is soaring in Australia where the multi-purpose vehicle received its DNA.
Advertisement

The Australian outback is where the new 2015 Subaru Outback gets its DNA. It’s the rugged terrain in Australia where the new generation Outback feels most at home. Australian buyers are snatching up the new SUV-alternative vehicle at record rates since it was introduced in December of last year.

Subaru Australia reports the new wagon has established an all-time sales record for the second consecutive month, according to official VFACTS figures released today (April 7). Subaru says the Outback notched 1180 sales, breaking the previous record of 890 set last month. The March figure is a whopping 410.8 percent ahead of the same month last year.

The new 2015 Subaru Outback received a huge price drop when it launched late last year. The base 2.0-liter diesel manual model opens the Outback range $5,000 cheaper than before and the 3.6R flagship comes in $10,000 less than the outgoing model. The reason for the huge price drop is due to the very favorable exchange rate with the Japanese Yen. This has no doubt helped the Outback receive a big bump in sales.

Australians aren’t just buying the new Outback because it comes with a lower price. Subaru succeeded by producing an Outback that suites the tough Australian environment. Buyers like what Subaru has done to the redesigned 2015 Subaru Outback. Subaru succeeded in producing the best ever off-road Outback, and it starts in Australia where the conditions are severe. The Outback wagon is synonymous with the vast, remote, and arid outback regions in Australia, and the name is intended to emphasize the off-road capability of the vehicle.

What is Subaru DNA?

According to Subaru, their DNA is what is driving Outback sales in Australia. Nick Senior, Managing Director, Subaru Australia, said, “It’s a credit to our safety story, our value for money and our Subaru DNA including All-Wheel-Drive and Boxer engine.”

The brand’s DNA starts in the area of performance in Australia with its rally-bred heritage on the rally circuit. The brand is also known for its safety by incorporating the latest car safety technologies in the Outback. The third core area is retained value. In North America the 2015 Outback received Canadian Black Book’s “Best Retained Value Award for the six consecutive year.

The all-new generation 2015 Subaru Outback is soaring in the country down under where it gets its name. Buyers all over the globe like what Subaru has done with the new multi-purpose wagon. The brand seems to be giving buyers exactly what they want at the right time.

LG's New EV Battery Plant Is a Welcome News for Tesla
Tesla Giga Berlin's New Hurdle: It's Not Only the Gov't, but Now Tesla Itself
END_OF_DOCUMENT_TOKEN_TO_BE_REPLACED