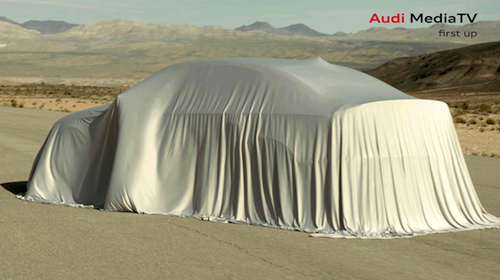 The all-new 2014 Audi A3 Sedan has been teased by Audi on its new online channel, Audi Media TV.
Advertisement

Audi Communications is launching its new online channel, Audi MediaTV, and will begin with an exclusive sneak preview of a new model. While Audi does not reveal exactly what the new model will be, we know it’s the new 2014 Audi A3 Sedan. Audi says it’s a new car, and a new broadcaster on the new Audi MediaTV. Audi will give a sneak preview of the new 2014 A3 Sedan on March 26th on the new online channel. This will be on the eve of the New York Auto Show and give a glimpse of the much anticipated A3 Sedan.

In the teaser image we can clearly see the silhouette of the new Audi sedan and in the video that is already on the online channel, we get a shot of the back seat as the presenter is talking about the new car. The new A3 Sedan will make its online preview before the New York Auto Show and then make its global debut at the 2013 Shanghai Auto Show in April. When will the new 2014 A3 Sedan arrive on U.S. shores?

A first-time offering in the U.S.

The Audi A3 was a completely new model when it was revealed last year and will arrive in the U.S. later this year. The 2014 A3 is Audi's smallest offering in North America and the new A3 sedan will represent the first time the company will offer a four-door sedan version in the U.S. Audi suggests the A3 sedan may be followed by a soft-top convertible, but there are no guarantees.

A new architecture and engine

The new A3 engine will likely be the new 2.0-liter engine that will come mated to either an optional six-speed S tronic, or a six-speed manual transmission. The new reworked engine is 11 lbs lighter than the previous generation powerplant and will feature improved performance. The 2.0 TFSI powerplant provides new technologies, ranging from dual injection through the Audi valvelift system and an exhaust manifold integrated within the cylinder head to innovative thermal management.

Audi intends to set the bench-mark

The 2014 A3 will offer both a front-wheel-drive version, and a more expensive quattro all-wheel-drive version. The new Audi A3 four-door sedan will compete in the marketplace against the BMW 1 Series, Volvo V40, and the all-new Mercedes-Benz A-Class. But Audi intends to set the bench-mark in the class with the all-new 2014 A3 Sedan, and it looks like they are getting it right.

The new Audi channel can be accessed as a stream through Audi MediaServices and provides the full Audi Communications video range. It will also feature information on upcoming events and live broadcasts, which will be shown on Audi MediaTV before anywhere else. The new Audi Communications news channel is aired exclusively in English. Look for the all-new 2014 Audi A3 Sedan launch to be later this year.