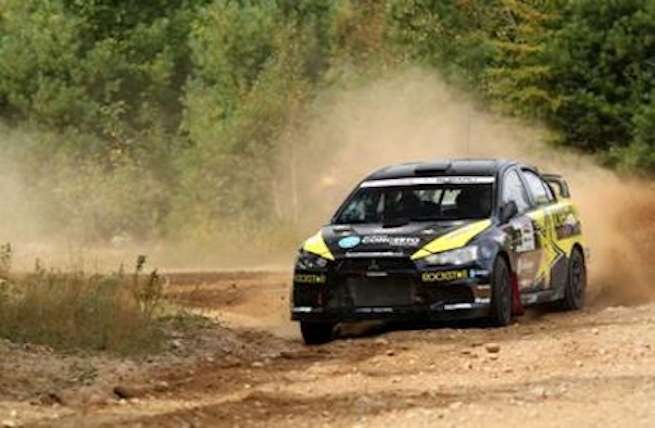 Standing on his race car at the victory podium is not new to L'Estage, as this was his seventh win at the event and his 40th national victory in North American rallying. Last weekend L'Estage won 16 of 21 stages on the rally and ended with a margin of victory of one minute, 18 seconds over the Subaru Impreza WRX STI driven by Patrick Richard.

Richard and co-driver Rob Fagg experienced a center differential issue early on during the first day of action. The team would have had to take phenomenal risks on every corner of every stage to capture the win. With its gruelling reputation, Rallye Defi requires near perfect driving and a strict management of pace in order to finish under such punishing conditions.

With half of the Championship now complete, Richard and Subaru Rally Team Canada has 56 points against L’Estage and Rockstar Energy’s 45. Subaru and Mitsubishi dominated the top ten spots with the Mitsubishi EVO finishing with four and six Subaru vehicles finished in the top ten. Max Riddle in a 2007 Subaru WRX, still only in his second full year of competition, claimed a spot on the podium, finishing third in the event.

With this race in the books, L'Estage and the Mitsubishi EVO X 11 car are right on the heals of Subaru. But Richard feels confident going into the next two rounds. After the race, Richard said, "We now have two rounds in the Canadian championship in my home province, British Columbia, coming up in the next couple of months. They're difficult mountain roads and that suits my style. I'm pretty excited and we'll see what it brings."

The Canadian Rally Championship now moves west for the next two rounds. The Pacific Forest Rally is set to take place in Merritt, British Columbia on October 4-5, and will be a crucial round for the Subaru WRX STI and Mitsubishi EVO X team’s championship hopes. Stay tuned.