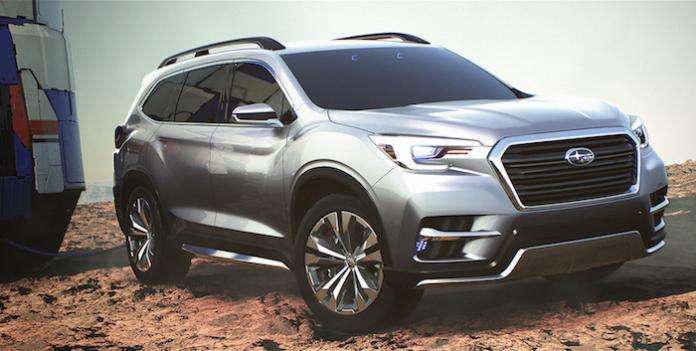 It’s just been announced, Subaru will unveil their new 2018 Ascent 3-Row Crossover at the Los Angeles Auto Show. Why is it a big deal for Subaru?
Advertisement

Subaru is getting ready to unveil their new 2018 Ascent 3-Row crossover production model at the Los Angeles Auto Show next month. The LA show runs from December 1-10, 2017, and the Subaru Ascent and more than 50 other new vehicles will make their world debuts November 27-30, 2017.

It’s a big deal for Subaru as this is their first new vehicle launch since 2012 when they unveiled the new Crosstrek XV. The 3-Row Ascent will be built in Lafayette, Indiana for American families, and it will be the biggest vehicle Subaru has ever built coming in 7-or-8 passenger cabin configurations. One of our readers who works at the plant says it’s big, “If you go off the actual CAD specs, a current Outback body would fit inside this thing!”

According to a report from Automotive News, who spoke with Tom Easterday, Subaru of Indiana Automotive's senior executive vice president, the plant boss said because the new Ascent is larger than the Outback, Impreza and Legacy models, (built at the same plant) the new 3-Row vehicle will get its own production line. Subaru discontinued Toyota Camry production in 2016 to make room for the new Impreza and now Ascent production at the newly-remodeled plant

The new 3-Row Ascent allows Subaru to enter a whole new large vehicle segment the’ve been missing until now. It allows their current customer base of young millennial families to move up in size as their family grows. Subaru is expecting the majority of Ascent buyers to be conquests from other brand’s vehicles like the Toyota Highlander, Mazda CX-9, Ford Explorer, Chevy Traverse, Dodge Durango and Jeep Grand Cherokee.

The new 7-or-8 passenger Ascent is being designed specifically for U.S. and Canadian families with active lifestyles. The new 2018 Subaru Ascent will make its debut at the Los Angeles Auto Show press event next month. Consumers will see it arrive in showrooms spring of 2018. Stay tuned.

James McGrew wrote on October 9, 2017 - 3:07pm Permalink
Thinking about purchasing a new vehicle and want the most advanced technology available for the consumer today.
Paul wrote on October 27, 2017 - 9:52pm Permalink
Most advanced AWD, look at Subaru. Most advanced infotainment, try something else lol
Denis Flierl wrote on November 14, 2017 - 10:03am Permalink
Subaru is making progress on their infotainment, but I agree with you Paul. Thanks for reading!
Paul Reid wrote on November 16, 2017 - 11:06pm Permalink
Don't get me wrong it didn't stop me from buying a forester :) With focus on the big things, the little things don't really amount to much. NOTE: I have bashed Subarus infotainment system since first experiencing it...that said, navigation maps are NOT a chargeable item ( no monthly recurring fee)...and free updates (for a few years I think)...and from what I can gather (haven't tried yet) they are open source so can be updated manually... Subaru being different has more upsides than downsides IMO