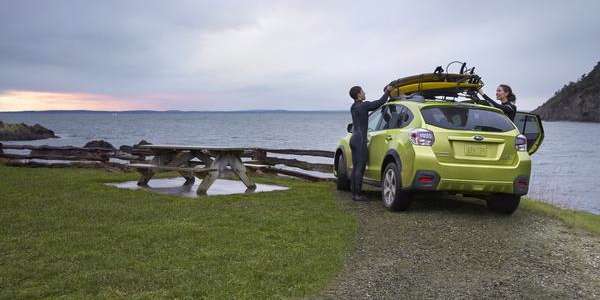 The new 2014 Subaru Forester and 2014 XV Crosstrek continue to set a blistering pace as the Japanese automaker sets more records in February. What is driving sales?
Advertisement

Can Subaru continue to set new sales records month after month with the 2014 Forester and 2014 XV Crosstrek? February proved to be another incredible sales month for the Japanese automaker with Forester and XV leading the way again. Subaru of America (SOA) has announced continuing record sales with February sales of 34,909 vehicles, a 24% increase over February 2013. The sales are a result of a new active generation buying the multi-use all-wheel-drive vehicles for their active lifestyles.

Subaru has been able to increase production capacity and are keeping up with the demand with new buyers who have never purchased a Subaru product before. Subaru is not only keeping the Subaru faithful happy with their new Forester SUV and XV crossover, but they are attracting new buyers at a record pace, with 60 percent of Subaru buyers being new to the brand.

Can Subaru continue with this record pace? Subaru says with the increased availability of their top models, they expect this momentum to continue through 2014. They will also get extra excitement from the launch of the all-new 2015 Legacy mid-size sedan which is due to hit showrooms later this year.

Subaru will also be launching the 2015 WRX and 2015 WRX STI performance cars later this spring and that will also keep momentum going. Thomas J. Doll, president and COO of Subaru of America said; “Our sales momentum continues and we are launching new models at record pace. We have a lot to look forward to in 2014.”

Subaru is doing well with their 2014 WRX and STI performance models. Sales for the rally-bred performance sports car were up 21.2 percent in February. BRZ two-door sports coupe has also been selling well with a sales increase of 47 percent over the same month last year.

But the 2014 Forester continues its blister sales with a 95 percent increase over last February. Subaru loyalists and new buyers alike are buying the new SUV at a record pace. The new XV Crosstrek and XV Crosstrek hybrid is next with an increase of 68.5 percent over the same time period last year. The all-new XV Hybrid is counted in XV Crosstrek total sales.

Will Subaru be able to achieve their target of 460,000 multi-use vehicles sold in the U.S. this year? The brand is attracting new buyers to the brand in big numbers as a new active generation likes the multi-use all-wheel-drive capabilities of Forester and XV Crosstrek. They are ideal vehicles for their active lifestyles. They use their vehicles to commute to work during the week, and their multi-use and all-wheel-drive capabilities fit right in to their weekend activities of skiing, hiking, biking, surfing and kayaking. Subaru is doing all the right things to attract a new millennial generation.

Other 2014 Subaru Forester and XV Crosstrek stories of interest.