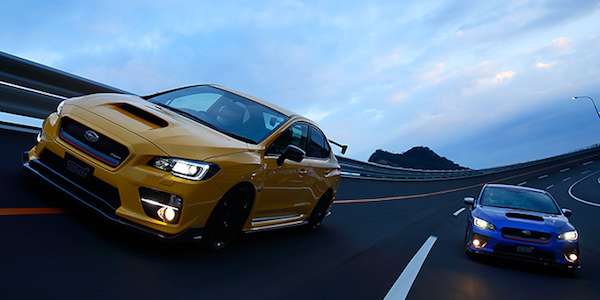 5 reasons why Subaru WRX/STI is flying off dealer lots

The 2016 Subaru WRX and WRX STI stable mates had the best year ever in 2015. Why are the performance sedans so hot?
Advertisement

Subaru’s 2016 WRX and WRX STI performance sedans are flying off dealer lots and it’s not going to slow down. The sports cars had their best year ever in 2015. Why are the sports cars so popular with driving enthusiasts? Because cars that are sporty, have performance beyond the norm, that are affordable and can be driven in any weather will always be a hot commodity with driving enthusiasts. Subaru is now growing its fan base by appealing to a new group of consumers that haven’t purchased a Subaru before.

Subaru created a nice market in the U.S. back in 2002 when they first introduced the WRX in the U.S. market. Performance fans took to the new cars like moths are attracted to light. It’s not a one and done car for Subaru. Subaru and their motorsport division Subaru Tecnica International (STI) made a long-term commitment to the cars that isn’t going away. Fans know these cars were developed from years of investment by Subaru motorsport on the rally stages around the globe. They have confidence in the car’s abilities to perform like few others.

Subaru redesigned the new-generation WRX and WRX STI in 2015 and sales took off immediately. It looked like after the initial wave of buyers took delivery of their cars that sales would slow down. In 2016, Subaru introduced the WRX/STI with added safety and new infotainment features. The sports cars are now appealing to a wider audience that goes beyond the loyal Subaru fans. The new-generation sedans are growing their following. Sales continue to climb.

The 2016 Subaru WRX and WRX STI had their best December ever with 3,089 cars sold in the U.S. alone. Year to date, the WRX/STI had their best year ever with 33,734 performance sedans moving off dealer lots in 2015. That’s a 32.3 percent increase over 2015 which leads the entire brand’s lineup in percentage of increase.

The 2016 Subaru WRX and WRX STI had their best year ever and will remain hot in 2016. Subaru and STI have a good thing going and it’s not going to stop. The performance cars will continue to evolve and get better. They’ve developed a sports car that makes the commute or the ride to the ski slope about as fun as it can get.