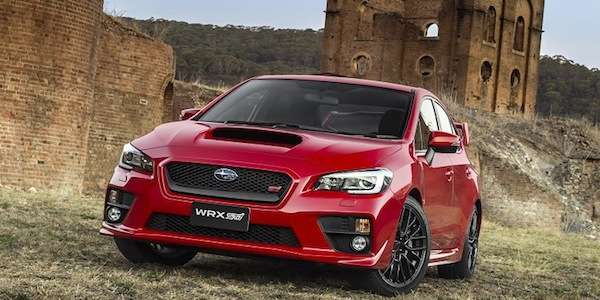 The new-generation 2015 Subaru WRX STI has received another global award and this one comes from Australia. Anyone who has driven the new performance sedan, or is lucky enough to own one, knows why this car is so popular all over the globe. The new STI was summed up by carsales.com.au as “an engaging and deliciously raw performance car.” Subaru’s new 2015 WRX STI has been named Best Performance Car Under $100K in the new carsales.com.au Car of the Year Awards.

5 reasons why WRX STI gets the award

The award by carsales.com.au combines critical evaluation with data to define the year’s best cars. 2015 WRX STI was praised and received the award for five critical areas. According to the website, the five key considerations are excellence in build, cost to run, retained value, consumer engagement and affordability.

More praise for the new STI

The Australian website went on to say, “The Subaru WRX STI remains true to its roots and its real straight-line speed, bullet-proof turbo boxer engine, agile handling and a cleverly-tuned chassis combined with one of the best all-wheel drive systems in the business, make this a truly iconic hot four.”

But in addition to the STI’s dynamic driving characteristics, the new performance sedan was recognized for its rating high in terms of cost of ownership. In Australia, the latest model is significantly cheaper and offers a capped-price servicing program for the life of the vehicle. The STI remains one of the best performance bargains on the planet and the website says, “the STI retains its affordable giant-killer tag while also making big strides in terms of interior comfort and convenience. And with four doors, five seats and an ample boot, its practicality is almost unmatched in the category.”

Subaru WRX STI is the hottest performance car around the globe

The new WRX STI is not only experiencing record sales in the U.S., but Subaru Australia reports that the new-generation sports car sales are up an astonishing 338 percent over the same period last year. Subaru STI has been a popular car in Australia and has deep roots in the World Rally Championship that go back to 1992. The Subaru WRX was born in Australia and Subaru teams perfected the STI there.

WRX STI has deep roots down under

And while they were fine-tuning the unique technologies that went into the WRX STI, they were also winning championships. There has never been another era in Australian motorsport like it. Team Subaru won 10 straight Driver’s Championships and eight Manufacturers’ titles, with the last six in succession. They won the World Rally Championship Manufacturers’ title three times, and the driver’s title three times as well.

The all-new 2015 Subaru WRX STI is popular all over the globe and Australian buyers are snatching up the new models as fast as Subaru can build them. And now Subaru’s new STI has been named Best Performance Car Under $100K in the new carsales.com.au Car of the Year Awards.

JeffS wrote on November 26, 2014 - 1:11pm Permalink
Now if Subaru can work out the niggles and STIafy the BRZ they'll have 2 Grand Slams.