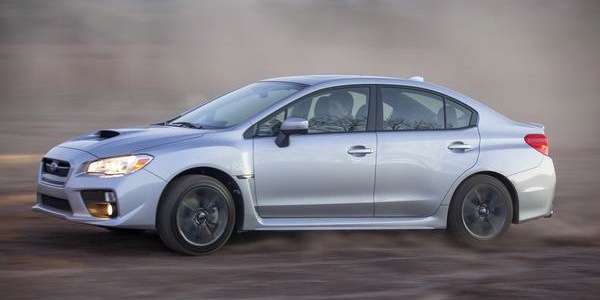 Subaru gave five lucky winners the chance to drive the new 2015 WRX before anyone else. And one went home with a free 2015 WRX.
Advertisement

Imagine entering a contest to be the first person outside of Subaru to drive a new 2015 Subaru WRX, and then getting the chance to drive it hard through a special road course. That’s what happened to five lucky winners who entered a contest from Subaru. Here’s how the contest went down late last year.

At 6:30 p.m. on October 17, 2013, visitors to VinGotMeIn.com saw an empty box, a blinking cursor and instructions to enter their VIN number. Those lucky enough to own the right car, (any year Subaru WRX) got into the site and were greeted by Subaru RallyCross driver Bucky Lasek issuing an irresistible challenge: Prove to me you can wheel. They each sent in a video clip of their driving skills driving their own personal WRX.

Troy Miller from Allegheny, NY, Tim Near from Loudon, NH, Will Lucas from Augusta, GA, Bobby Whiteley from Detroit, MI and Chase Wilson from Seattle, WA were the luck five guys who got the chance of a lifetime. Drive the new 2015 Subaru WRX before it was seen or driven by anyone outside of Subaru.

The five lucky winners were flown to an undisclosed site where they were picked up in an old Cadillac limo and taken to an abandoned warehouse. They were taken in through a garage door and were greeted by a new 2015 Subaru WRX that was in pieces on the ground. They had the honor of being introduced to the “godfather” of the WRX, Subaru’s Masuo Takatsu who is the WRX Project General Manager.

Takatsu went through every piece of the car and explained what changes Subaru made to the 2015 new-generation WRX. He then gave then an opportunity to ask any question they wanted and then answered them all. Before they could drive the new performance car, Lasik wanted to educated them on what was behind the structure of the new WRX. Phase one was to show them the philosophy behind the new generation machine.

Phase two was to get their hands dirty where they actually get to touch each part of the WRX and they had to assemble the car from all the pieces on the floor. They got a hands on experience of what really makes this performance car tick. These guys were able to wrench and had fun putting the car back together.

Phase three was getting to drive the car through a “Hoon Cross” which is an autocross mixed with sliding. The course featured fast straights mixed with technical turns. But first they jumped in a 2014 WRX for a hot lap to so they could experience first hand the difference between the old and new-generation car. Lasek says it’s “like going from a family sedan into a street prep car.”

Phase four was driving the 2015 WRX. Each driver got two laps in the new performance car with the last lap counting. Each was timed in the challenging course with the winner not sure what he would get. But the big surprise was whoever had the fastest time took home a new 2015 WRX.

This contest shows just how committed Subaru and STI is to their fans who are WRX enthusiasts. They are more like the average guy on the street than we can ever imagine. Watch the video below and see what Subaru did for five WRX enthusiasts and how important fans are to the company. See which lucky guy got to take home a new 2015 Subaru WRX and what he did to win it.

Other 2015 Subaru WRX stories of interest