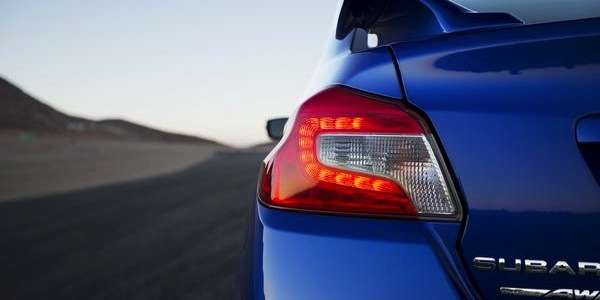 The all-new 2015 Subaru WRX and 2015 WRX STI are getting ready to launch. The WRX gets a bump in hp, why not the STI?
Advertisement

Subaru launches the new 2015 WRX and WRX STI this summer here in the U.S., and the WRX seems to get more upgrades in performance. Why did Subaru choose to give the WRX an increase in horsepower while the STI stays the same? In an interview with Motoring,com.au, Subaru WRX Project General Manager, Masuo Takatsu told the Australian automotive site, that it has to do with numbers of cars sold.

2015 WRX now gets 268 horsepower and 258 lb ft of torque. The WRX engine is the all-new 2.0-liter FA turbocharged Boxer version of the new Forester 2.0 XT powerplant. But the WRX version uses different cams and higher-rate valve springs and other enhancements to enhance the performance envelope. The 2015 WRX STI comes with the 2.5-liter engine and retains the same 305 hp. Why didn’t the STI get a bump in hp?

There is a greater number of WRX models sold and Subaru wanted to increase the appeal of WRX to more buyers. Subaru says the stronger selling WRX received more focus “this time round” due to its stronger sales. Masuo Takatsu said in the interview, “With more purchasers buying a WRX, the changes here, including the increase in performance, were imperative in maintaining sales.”

Subaru says they focused the changes made to the WRX STI on better utilizing the existing power of the “carry-over” 2.5-liter boxer powerplant. “As far as the WRX STI is concerned, what I believe needed the most evolution was the fact that the power of the engine was unable to utilize its full potential,” Takatsu-san told Motoring.com.au. “So bringing the performance of the chassis and body to match the potential of the engine was the first priority.”

In a recent interview with Dominick Infante, National Subaru Manager, Product Communication in the U.S., told me, “For the U.S. market, we felt, and have felt, that STI customers will want more torque and more power and more turbo feel. That is why we chose to keep the 2.5 in the STI. The previous chassis never let us fully exploit all the power of the 2.5-liter. This new chassis is such a dramatic improvement that it is now possible to put all the power down. It’s an excellent combination and a very fast car.”

Subaru also knows that many STI buyers will modify the engine to get more horsepower out of the 2.5-liter boxer. Infante went on to tell me, “This engine also has a legion of followers and tuners, so we feel its tried and tested abilities will be appreciated by STI fans.”

Will Subaru decide to bump up horsepower in the 2.5-liter STI in the future? Takatsu-san was optimistic, but non-committal with the interview with the Australian auto website.“There are no solid plans (to increase performance), but it is something we’d like to consider in the future,” he concluded.

The all-new 2015 Subaru WRX with the new 2.0-liter turbo gets some significant power increases due to it’s wider appeal and better sales around the globe. They are also able to expand the appeal of WRX by offering it with the new CVT automatic. The 2015 WRX STI stays with the 2.5-liter powerplant with 305 hp because Subaru could better mate its power capabilities with the new upgraded chassis. Both performance models get improved performance, but Subaru knows they appeal to a much different audience.