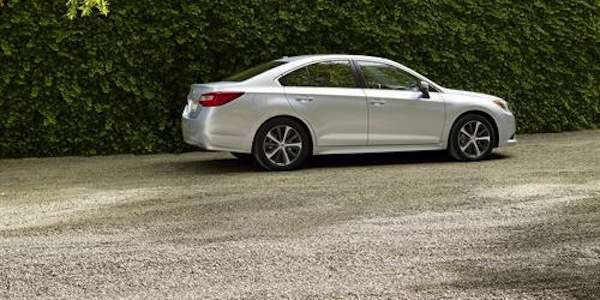 Subaru debuts advertising campaign for the all-new 2015 Subaru Legacy here in the U.S. Why is Legacy a compelling alternative?
Advertisement

The all-new 2015 Subaru Legacy is getting 3 new TV spots as Subaru shows off four features that set this new sedan apart from the competition. Subaru is rolling out a new advertising campaign for the launch of the new six-generation Legacy as it celebrates 25 years. The flagship is positioned to compete in the mid-size sedan segment as an alternative to the mainstream choices from Toyota and Honda. Can the new 2015 Legacy compete?

The new 2015 Legacy sedan has four features that set it apart from the competition and makes it a compelling alternative to the other popular choices. It comes with Symmetrical all- wheel-drive, EyeSight, 36 mpg and longest lasting sedan in its class. This will help Subaru distance the new Legacy from the others in this class. And they are telling the story through 3 new TV spots that are unique.

Subaru has a unique advertising campaign for all their vehicles that taps into their core values and more importantly, their customers values as well. Alan Bethke, vice president of marketing for Subaru. “The all-new Legacy advertising campaign focuses on Subaru’s core values relayed into sedan form. With all new safety and infotainment technology, as well as more interior room and trunk capacity, the Legacy offers customers a compelling alternative to a two-wheel drive midsize sedan.”

Subaru is doing a lot right as they look to increase sales of their new flagship sedan in support of its business goal of a sixth consecutive year of record sales. They are rolling out three new ads that are both funny and serious and talk to customers in their niche segment of all-wheel-drive vehicles. But Subaru is also talking about safety, fuel mileage and longevity of their vehicles. These four features will help Subaru set themselves apart from the crowd.

The three national television spots called “Passengers,” “The Fix” and “Jr. Driver” each show a different Subaru core value. Subaru has come up with a unique approach in its advertising and it’s working. Subaru says they focus on something different that appeals to their buyers, and its called peace of mind. Subaru of America’s overarching theme in the three latest national ads support its broader “Love” campaign. They started airing in July, but in case you haven’t seen them, we’ve included them below.

The new 2015 Subaru Legacy spots are centered around the new-generation sedan’s ability to help the consumer do all the things they and their kids enjoy to do.

Other 2015 Subaru Legacy stories of interest.
Why these two Subarus are the most likely to go 200,000 miles