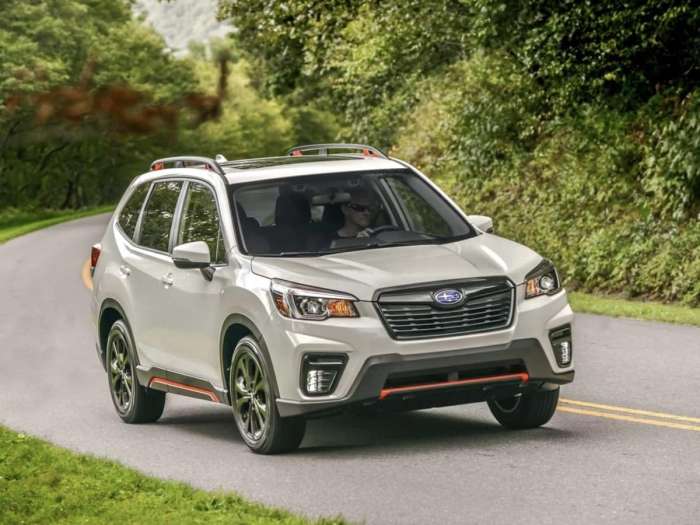 The new fifth-generation 2019 Subaru Forester repeats as “Best Car To Buy”. See three reasons why it earns the top spot for the second time.
Advertisement

The newly-redesigned 2019 Subaru Forester is starting to pick up awards. The small SUV has been named “Best Car to Buy” 2019 by Car Connection for the second year in-a-row. Forester is the first-ever repeat winner in the award’s 9-year history. Forester won in 2014 when it received a complete remodel in its fourth-generation model.

The automotive website chose the all-new 2019 Forester for three reasons, its top safety scores, utility, and value. Car Connection uses a “TCC Rating” system based on safety, comfort and utility, fuel economy, performance, and styling. They say even though Forester is not a radical departure from the outgoing fourth-generation model, the 2019 version is all about the virtues it brings to consumers. “There’s not an ounce of revolution in the Forester, just virtue, across the board,” says Car Connection.

Those virtues would be it’s standard all-wheel-drive system, outward visibility, a Boxer engine that sits lower in the chassis for improved driving dynamics, and safety is a core value that the Subaru brand values highly. It’s what sets the small Japanese automaker apart, and could be why they keep getting awards.

With a high score in the comfort and quality category, the new 2019 Forester SUV gets picked again in 2019 as “Best Car To Buy” against a strong field of pickups, new SUVs and crossovers. It beat the 2019 Acura RDX, Chevy Silverado 1500, GMC Sierra 1500, Honda Insight, Hyundai Santa Fe, Ram 1500, Subaru Ascent, and Volvo XC40.

Forester also gets Subaru’s EyeSight driver assist safety system as standard equipment for the 2019 model year. The 2018 Forester model extended its title as the longest-running winner in the small SUV category with a record 12th win last year. When equipped with EyeSight, the 2018 Subaru Forester earned the 2018 TOP SAFETY PICK award from the Insurance Institute for Highway Safety (IIHS)

Look for the 2019 Forester to get even better scores once it’s tested by the IIHS later this year. According to the Repairer Driven News, Subaru built 56 percent of the next-generation 2019 Forester body out of high-strength steel which integrates the latest version of the Subaru ring-shaped reinforcement frame design. It’s one of the reasons the new 2019 Subaru Forester gets picked again as “Best Car To Buy” 2019.

Ed B wrote on November 13, 2018 - 9:22am Permalink
Hmmm, bring back to turbo and hood scoop - I'd buy again! Sales are great news for Subaru but with a turbo option that could really enhance the carline. There is no argument in terms of value proposition - that's probably what put them over the 2019 Acura RDX and a few of the others.
Nikolai wrote on November 19, 2018 - 5:30am Permalink
They put old radio in new 19 Forester. Same old StarLink radio problems just surfaced: It forgets radio (AM/FM) presets. And it simply dies. Black screen, no response. Common for 8" Starlink headunits with NAV.
Kelvin wrote on April 21, 2019 - 7:17pm Permalink
CVT transmission with Boxer engine could be the biggest draw back for this car. The CVT would not be reliable enough to take in the powerful boxer engine in the long run, 3yrs the most to run into casket issues..