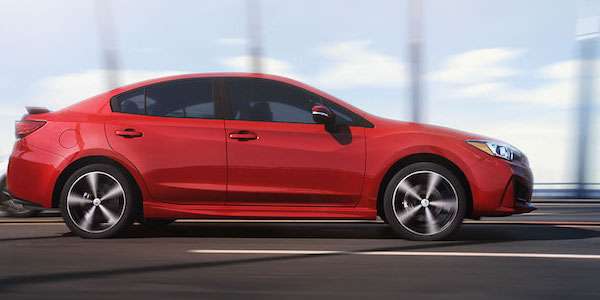 3 Reasons Why Newly Improved Subaru Impreza Gets its Mojo Back, How it Will Challenge Leaders Honda, Mazda and Toyota

The 2017 Subaru Impreza gets its Mojo back. Here’s how it will challenge the Civic, Mazda3 and Corolla.
Advertisement

When Subaru Impreza broke away from the sporty WRX, the compact car lost some of its mojo. Here’s how the newly-improved 2017 Subaru Impreza will get it back. The Honda Civic, Mazda3 and Toyota Corolla have been the best in the compact car market, but that could be changing thanks to the new Impreza which will hit dealer showrooms later this year.

How will Impreza challenge the leaders?

Ever since Subaru separated the WRX performance car from the Impreza nameplate, WRX took the performance-focused brand with it. Impreza lost it’s identity and has been looking for it ever since. Consumers noticed and spent their money on Civics, Mazda3s and Corollas. But Subaru re-invented the Impreza, and for 2017, things could change.

What happened to Impreza?

The car lost some of its reputation that it's fun-to-drive. Subaru believes the new 2017 Impreza improvements will restore consumer’s perception about the compact car. Nick Senior, Subaru Australia boss says, “If we go back the fun-to-drive element of Impreza was represented by Impreza WRX. Now the two have gone their separate ways that is why you’re seeing more of that fun-to-drive element come into the Impreza.

How did Impreza get its mojo back?

It gets new underpinning which will change the driving dynamics because of Subaru’s new Global Platform. The body and chassis will be 70-100 percent more rigid which will translate to improved steering response, and the increased rigidity of the suspension mounting will also reduce body roll by 50 percent compared to current models. The 2017 Impreza will have a lower center of gravity improving driving dynamics in the corners bringing back its fun-to-drive reputation. A new model is also coming.

The new 2017 Subaru Impreza 2.0i Sport gets a sport suspension and Active Torque Vectoring for improved driving dynamics that should ramp up the fun-to-drive meter even more. The revised 2.0-liter boxer naturally aspirated engine will also help boost performance with its direct fuel injection and 4hp increase. The new compact 2017 Subaru Impreza sedan and 5-Door will be challenging the Honda Civic, Mazda3 and Toyota Corolla. The Impreza’s mojo is back.