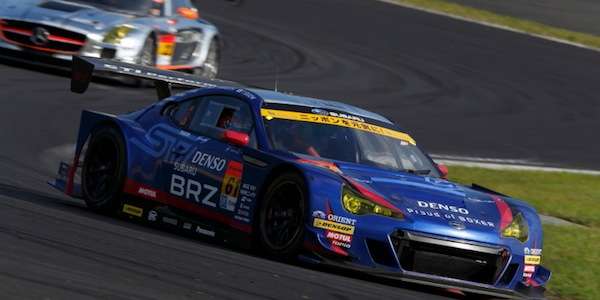 The 2015 Subaru BRZ GT300 gets an 8th place finish in SUPER GT this weekend. What were 3 challenges the team overcame?
Advertisement

The 2015 Subaru BRZ GT300 race car overcame an earlier accident to get ready for the SUPER GT race this weekend. While practicing at Sportsland SUGO on July 25, the BRZ’s fuel line ignited and the race car sustained extensive damage and frantic repairs had to be made for the BRZ to get ready. The repairs were completed just in time and the BRZ GT300 qualified in 10th position on Saturday for round four of the SUPER GT at Fuji Speedway yesterday.

The Subaru BRZ GT300 races against a tough field of BMW, Mercedes-Benz, Porsche, Toyota, Leon and Honda race cars in the SUPER GT Series. The BRZ started in the middle of the grid yesterday for round four at Fuji Speedway and worked its way up to an 8th place finish by the end of the race. The team had trouble in the pits when they were swapping tires and an impact wrench broke during a pit stop. The challenges didn’t stop the team.

The 2015 Subaru BRZ was running fast and recorded the second fastest lap of the day just 0.061 seconds behind the leader. The BRZ even dropped all the way back to 15th spot after a “melee” during the early part of the race. Driver Iguchi Taku was able to slowly work his way back in the crowded field and all the way to eighth place when they took the checkered flag.

Eiji Tatsumi, general director of the BRZ team was not satisfied with the eight place finish, but was happy with the results. He said after the race, “We fell back at the start of the race, but our drivers worked hard to get back in the race. The BRZ responded and the team did a good job with all the difficulties we had before the race.”

Tatsumi was proud of the work the whole team leading up to the race and how they overcame difficulties during the race. The Subaru Tecnica International (STI) mechanic that repaired the BRZ after the fuel line incident at SUGO received special recognition and was awarded the "ZF Award" as the “Best Mechanic” for his outstanding work getting the BRZ ready for the race.

Round five will be the International SUZUKA 1000km to be held at the Suzuka Circuit on August 29-30. This track boasts the longest distance and it will be another good battle for the 2015 Subaru BRZ GT300. Stay tuned.

Tesla Contemplates A New Strategy for China Retail even As Sales Boom
Jay Leno on Elon Musk & EVs: “I Think He Should Get ... Credit"
END_OF_DOCUMENT_TOKEN_TO_BE_REPLACED