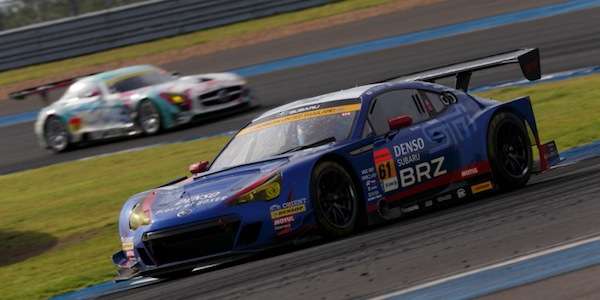 The 2015 Subaru BRZ GT300 qualified 11th and finished in six place at round 3 SUPER GT. How does BRZ catch the larger displacement engines?
Advertisement

This weekend, the 2015 Subaru BRZ GT300 qualified in 11th position in the field of fast SUPER GT cars. The BRZ and Subaru Technica International (STI) moved up in the race and finished in sixth place. The team knows they can compete in the corners, but the International circuit at Buriram, Thailand has a long straight that is advantageous to some of the other large displacement engines that the competition runs.

Hideki Yamauchi ran an aggressive race right from the beginning. Shortly after the start of the race, the BRZ GT300 was able to move up from 11th to 10th quickly after the second lap. STI knows that the Subaru BRZ GT300 is built for the corners and that’s where it shines. This is where BRZ can get an advantage over the faster cars.

High speed is the name of the game at the Buriram International circuit but the BRZ was able to run a smart race and catch the competition with super driving dynamics in the corners. Yamauchi says the balance of the sports car is superior, and he was able to “go skipping the rivals in cornering.”

Driving dynamics in the corners

The driving dynamics of the 2015 Subaru BRZ production car is similar to the GT300 race car. Anyone who has driven the rear-drive sports coupe on the track can attest to this. The 2.0-liter boxer engine only has 200 hp, but the driving dynamics makes up for raw power in the two-door sports car.

Critical in it’s handling dynamics in the BRZ is that the sports coupe has one of the lowest centers of gravity of any production car in the world at just 18.1 inches. This is because of Subaru’s Boxer engine design with its inherently low height and its mass concentrated low in the chassis. It contributes to all Subaru’s having this important characteristic, but BRZ takes maximum advantage of...read more.

The 2015 Subaru BRZ GT300 didn’t win the race at Buriram International circuit, but it made a good showing of how aggressive driving and having a balanced car can be an advantage over some of the larger displacement engines. After 61 laps, the BRZ GT300 had moved up from 11th at the start to 6th place when the checkered flag was swung down. The next round of SUPER GT is at Fuji Speedway on August 8-9. Stay tuned.