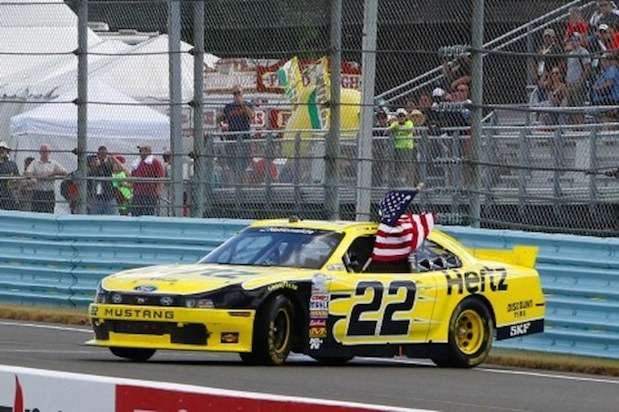 Yesterday’s win was the fourth of the season for Brad Keselowski and eighth for the No. 22 Hertz Ford Mustang and Penske Racing team.
Advertisement

Brad Keselowski in his No. 22 Hertz Ford Mustang has given Ford Racing their ninth NASCAR National Series win at Watkins Glen. Yesterday’s win was also the fourth of the season for Brad Keselowski and eighth for the Penske Racing team. The Ford Mustangs finished 1-2 in the race with Sam Hornish Jr. coming in second in his No. 12 Penske Truck Rental Ford Mustang.

Keselowski had finished in the runner-up position in his last three races at Watkins Glen, including twice in Sprint Cup and once in the Nationwide Series. But that all changed Saturday, as Keselowski beat the field and brought home the victory for Penske Racing in the Zippo 200 at The Glen. The Hertz Ford Mustang was the fastest car on the 2.45-mile course.

All three Penske cars were fast and Keselowski and Sam Hornish Jr. were able to finish 1-2. Sam finished third last year and moved up to second place this year. He said, ”Third last year, second this year, maybe we’ll get us a win next year.”  Sam Hornish Jr. started at the pole position and the two battled all day. “I did everything I could do to try to pressure Brad and to make it a great race for the fans and I wore my stuff out trying to keep with him.”

Victory was sweet for Keselowski and he was definitely happy with the way the No. 22 Ford Mustang performed. He said. “We had a fast car and that’s so important. The Hertz team and everybody at Penske Racing did a helluva job.  All three Penske cars were fast and that’s so important.  You’ve got to have a fast car and you’ve got to execute the weekend to win these races and our team did that today.”

Keselowski kept “plugging away” and it took a fast Ford Mustang car to win. But he learned more about pushing himself than he did the car. When asked on victory lane what he learned from the race, he made an interesting statement. “I think you learn more about yourself and what your limitations are and how hard you push the car and know when you’re pushing it too hard and know when you can push it some more.  I think you learn more about yourself than you do the cars.”

Even though the Penske Ford Mustangs are very fast, it takes a driver who knows how hard he can push the car and more importantly, how far he can push himself. Sometimes it’s more about being smart and not doing something dumb on the track. Keselowski went on to say, “All three Penske cars were very, very fast and it was pretty apparent that all three of our cars had a shot to win the race if we just didn’t do something dumb, so I tried to not do something dumb the whole race.  I maybe came close a couple times, but it all worked out and had the car and the team to really execute it.”

Victory was sweet for Brad Keselowski and the No. 22 Hertz Ford Mustang Penske Racing team. The team ran 1-2-3 for much of the race and the Ford Mustangs were the fastest cars. A 1-2 finish is something special. Now it's on to Bristol to see if the team can win number five.