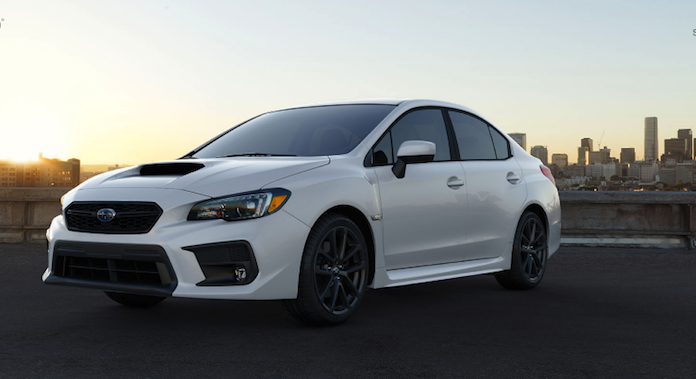 The newly-refreshed 2018 Subaru WRX/STI is a top residual value performer again. They are “Best Sports Car” values on the planet according to ALG.
Advertisement

The 2018 Subaru WRX and WRX STI are the “Best Sports Car” values on the planet according to ALG. In ALG’s recent 2018 Residual Value Awards, presented at the LA Auto Show this week, the high-performance sedans score number one for having the best residual value in the hotly contested Sports Car segment.

One of the most impressive facts, is that the Subaru WRX and WRX STI four-door sports sedans, take home ALG’s top honors as Best Sports Car for the fourth time in-a-row. When Subaru removed the Impreza nameplate from WRX/STI with the new-generation models in 2015, they became a stand-alone model and ALG put them in their own category.

According to ALG, the 2018 WRX and WRX STI are predicted to retain the highest percentage of their original price after a four-year period better than any other sports cars in America. This segment is typically known for their value dropping quickly, but not the WRX/STI sedans.

A proven legacy of high performance

ALG gives the Subaru performance models glowing remarks, “Subaru’s strong consumer perception, and long-standing reputation as one of the leaders in turbo-charged performance vehicles, has positioned the WRX as the de facto choice for consumers looking for the perfect blend of performance and safety. For a new generation of performance enthusiasts nothing compares to the raw power and gripping all wheel drive of the Subaru WRX. With the support of the Subaru brand and a proven legacy of high performance, the WRX has been awarded the ALG Residual Value Award for each of the four years it has been available as a stand alone model.”

According to ALG, the newly-refreshed 2018 Subaru WRX and WRX STI are the best values on the planet, and retain their value better than all other sports cars in America. For this reason, if you are thinking of buying a used WRX or STI, it might be better to check out the new 2018 WRX/STI because older models hold their value so well.

Next up for the 2018 Subaru WRX STI is the 50th anniversary Limited Edition models coming early next year. WRX/STI editions will feature a new, common color (not announced) and will come with special badging. Look for them to be unveiled in February, 2018. Stay tuned.