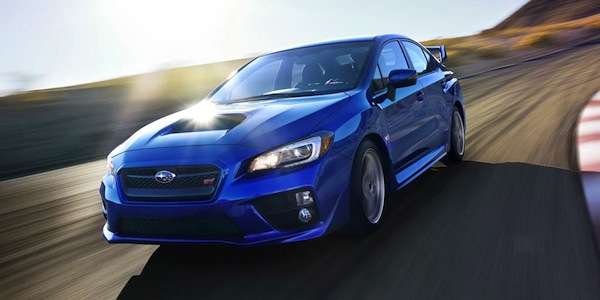 EVO Australia magazine has given the new 2015 Subaru WRX STI a “turbocharge tick”, rating it four and-a-half stars in their May edition.
Advertisement

The Australians love performance cars, and like the 2015 Subaru WRX STI just as much or maybe even more than performance fans in the U.S. But why does the Australian magazine think so highly of the new WRX STI performance car from Subaru? The STI shouldn’t even be in the same conversation with automakers like Porsche, Ferrari or Aston Martin.

But the small Japanese automaker has received praise from Australia’s respected automobile magazine EVO, for what Subaru and Subaru Technica International (STI) have done with the new 2015 WRX STI. Why would a Subaru, the 2015 WRX STI, even me mentioned with names like the Porsche 911 GT3, Ferrari F12 Berlinetta, Mercedes-Benz SLS AMG Black, Aston Martin V12 Vantage S or the Audi R8 V10 Plus?

EVO Australia magazine has given the new-generation 2015 WRX STI a turbocharge tick, rating it four and-a-half stars in the May edition. The magazine says that the WRX STI is a better performer on the track than many more expensive sports cars. In the 10-page feature, EVO Editor, Jesse Taylor, says, “The STI eats up the tarmac at a rate that would leave many more expensive cars in its wake.”

Now this writer hasn’t had a chance to drive the 2015 STI, but I am driving the new 2015 WRX this week and I am thoroughly impressed with the “lighter” version of its more potent big brother. The 268 hp WRX has impressive power in all gears and pulls strong in 6th gear at high speeds. At 70 mph, I pushed the pedal down and found myself at 85 in seconds. After just one day in the WRX, I found myself thinking, “if the WRX will do this, what will the STI do?”

And EVO magazine is impressed with the STI. The new 2015 WRX STI has received noticeable advancements and EVO could tell the difference. Subaru and STI have moved the car forward from the previous generation in terms of improving the chassis and body to better utilize and match the power of the 2.5-liter turbo boxer. Jesse Taylor goes on to say, “It’s astonishing how much throttle the STI will take and how early it can be applied. On dirt or wet tarmac, the Subaru digs deep to find useable grip to employ its full 221kW. The chassis has a terrific, organic feel to how it deals with inputs from driver and road.”

The previous generation STI wouldn’t let the 305 hp 2.5-liter engine fully exploit the full potential of the powerplant. This new chassis appears to be a dramatic improvement that it’s now possible to put all the power down on the road or tarmac. Subaru has come up with a new STI that EVO magazine found is an excellent combination of power and agility and says it will outperform more expensive sports cars. I can’t wait to get my hands on one.