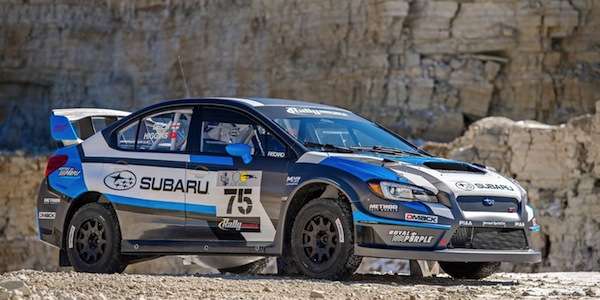 The Rally in the 100 Acre Wood starts today and SRT USA revealed their new widebody 2015 Subaru WRX STI Rally Car. The Subaru team ran the #75 winning car at Sno* Drift Rally with a camo livery and now the STI gets a fresh new 2015 team livery for the rest of the Rally America Championship season.

Higgins likes the performance of the new STI rally car and says it’s more stable and he can get more speed out the new rally car. Higgins says, "The new car is more stable and has less oversteer, and that really suits my driving style. In our gravel tests we have seen improved cornering speeds compared to the 2014 car and the new 2015 chassis is proving to be much improved in many areas.”

Higgins looking for a different result from 2014

At last year’s Rally in the 100 Acre Wood, Higgins had a disappointing outing. On day two, disaster struck Higgins and Drew with an engine failure on Stage 9 that forced them out of the race. The Did Not Finish (DNF) broke an amazing streak of 22 consecutive podium finishes by Higgins. Ken Block who seems to “own“ the Rally in the 100 Acre Wood, won the race again. The victory for Honnigan Racing’s Ken Block marked the seventh time he won the event out of the last eight attempts.

No battle with Ken Block this year

Higgins was looking forward to a big battle with rival Ken Block at the Rally in the 100 Acre Wood this year in the new 2015 STI, but after officially entering the rally, Block recently withdrew for undisclosed reasons. Higgins said, "It's a big shame that Ken is not here, it's always a great battle and it's like training for a big boxing match then they don't show."

Even without Block, it will still be a challenge for Higgins and Drew as conditions at this year's rally will be extremely difficult with snow and ice still covering many of the roads in the area. Subaru Rally Team USA competes with the 2015 Subaru WRX STI rally car with new livery car at this weekend's Rally in the 100 Acre Wood, near Salem, Missouri. Stay tuned.