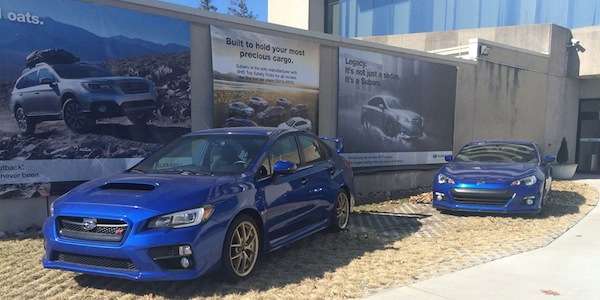 Subaru engineers used the BRZ sports coupe to develop the new generation 2015 WRX and WRX STI. What did they learn from BRZ?
Advertisement

Subaru even used its sibling rivalry with the BRZ sports coupe to help develop the driving performance on the new generation 2015 WRX/STI. BRZ uses a rigid lightweight body and has one of the best weight distribution ratios of any sports car. The sports coupe has excellent driving performance and Subaru engineers learned things from the WRX/STI’s sibling that helped make the new sports sedan the best ever.

This is what Masuo Takatsu, FHI Product General Manager, had to say about what they leaned from the rear-wheel-drive BRZ. “With any car, from the time you turn the steering wheel until the time the car starts to actually move there is a slight lag time. We radically shortened the lag time, considerably enhanced the stability and sharpened the turn-in. With the rear wheels getting a firm grip, we got the rear axis to become the center of rotation. It gives you a sense of being able to take the car and put it exactly where you want it.”

Subaru engineers actually went as far as tweaking how each coil spring is wound to reduce the friction. Check out how Subaru did it.

Improvements made on the new generation 2015 WRX/STI

2015 WRX gets a new 2.0-liter Direct Injection Turbo engine that has torque (258 lb ft) that comes on strong with low revs, resulting in an engine that’s extremely easy to control. Takatsu stated in the video, “We aimed for a setting where the throttle opens up and it lets the driver feel acceleration Gs when you hit the pedal. Vastly improved over the traditional EJ turbo engine.”

Anyone who has driven the Subaru BRZ knows why Subaru used the sports coupe to help develop the 2015 WRX/STI performance sedan. BRZ has the driving performance of a much more expensive sport car. Subaru engineers succeeded with BRZ’s help to develop the best performing WRX/STI ever.